It’s family portrait season, and I wanted to share this beautiful and extensive family shoot. I was flown to Texas to photograph this wonderful family while they would all be together on vacation at a gorgeous lake house. I’ve done a lot of work for this family over the years, and I loved seeing them all again to create these wonderful art pieces. 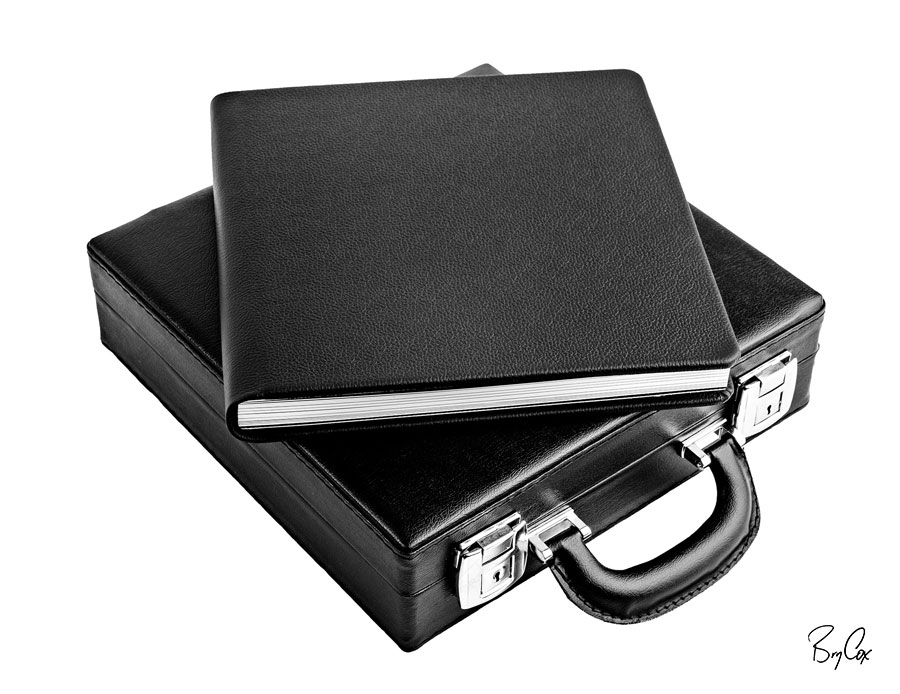 Kids seem to grow the fastest between family portraits, and these kids were no different. All of the children had changed, and were so adorable and fun to work with. This image below was our favorite big group where everyone looked their best. 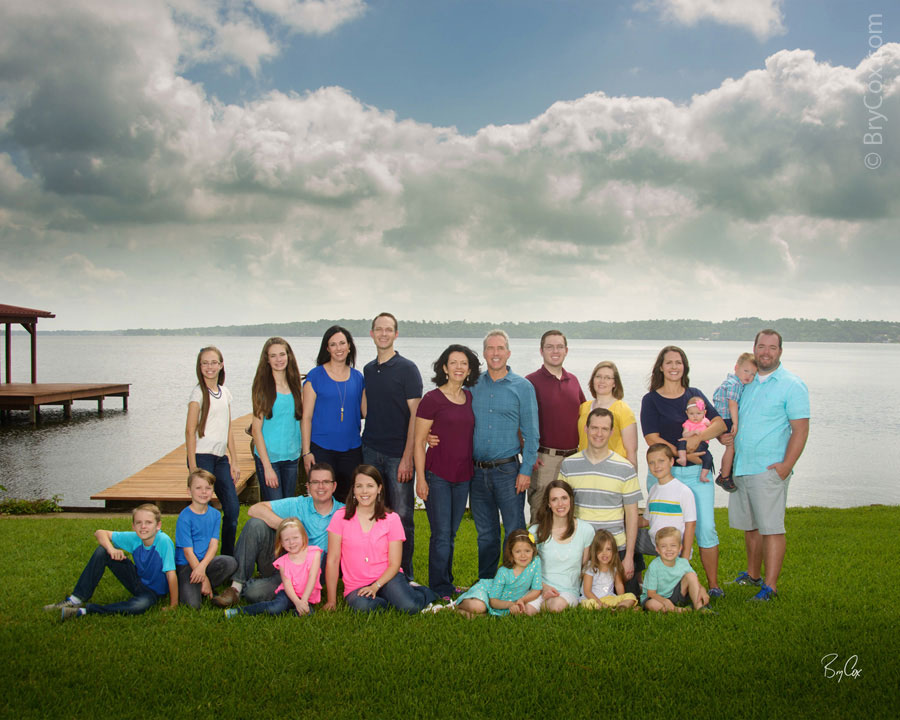 This Texas lake made for a wonderful backdrop. 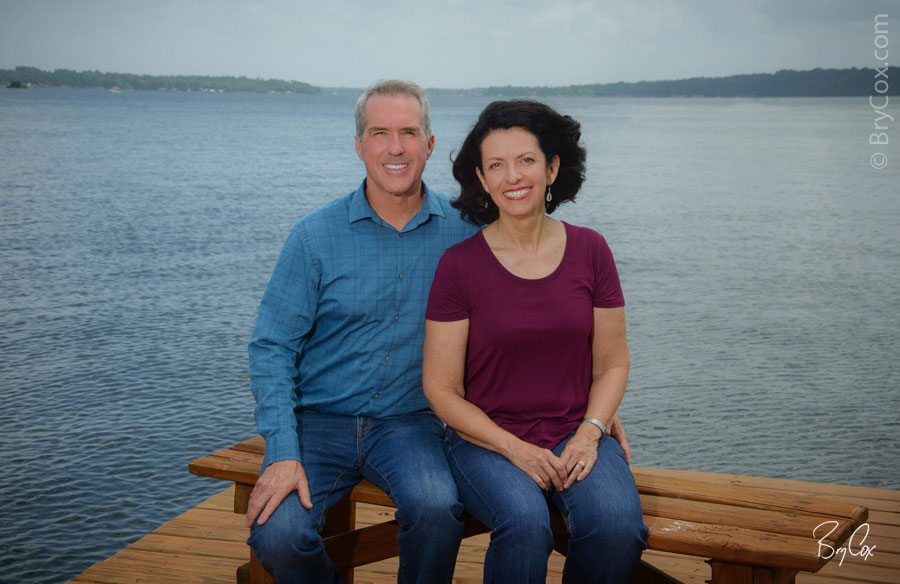 And as you can see in the video, I spent time photographing each family, creating various groupings and ideas and even made some into paintings. Here are some of those. 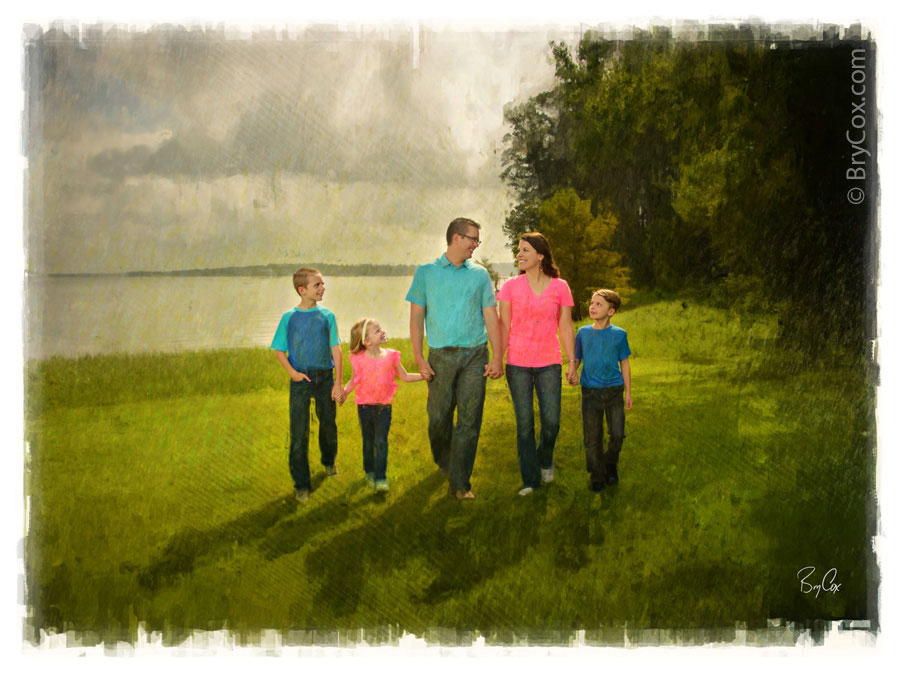 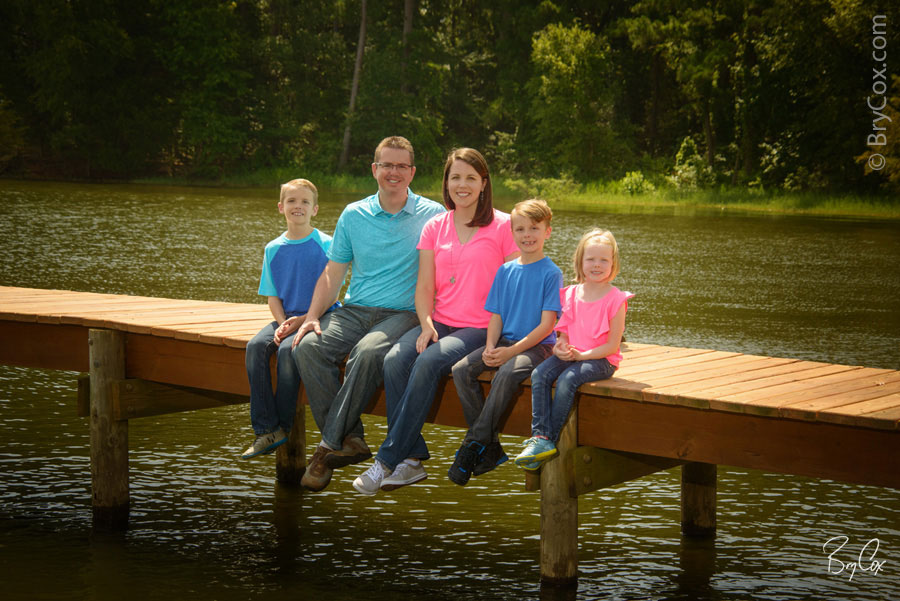 After each family, I focused on couple and individual children’s portraits too, getting great expressions and capturing personality in each child.

When I was done with one family, they’d go off to play and enjoy their vacation, and I’d begin again with another family. 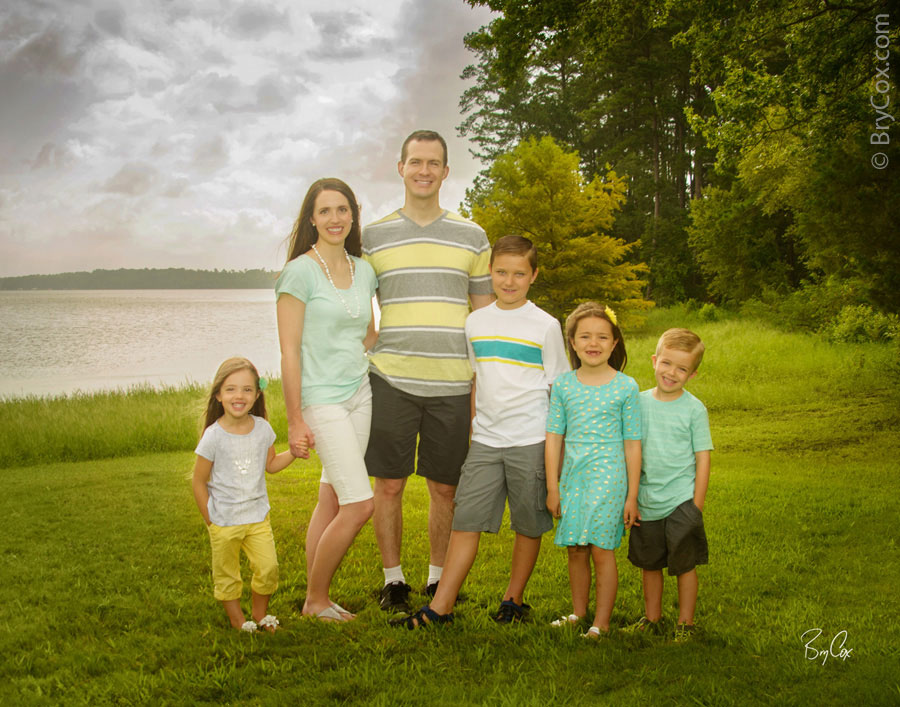 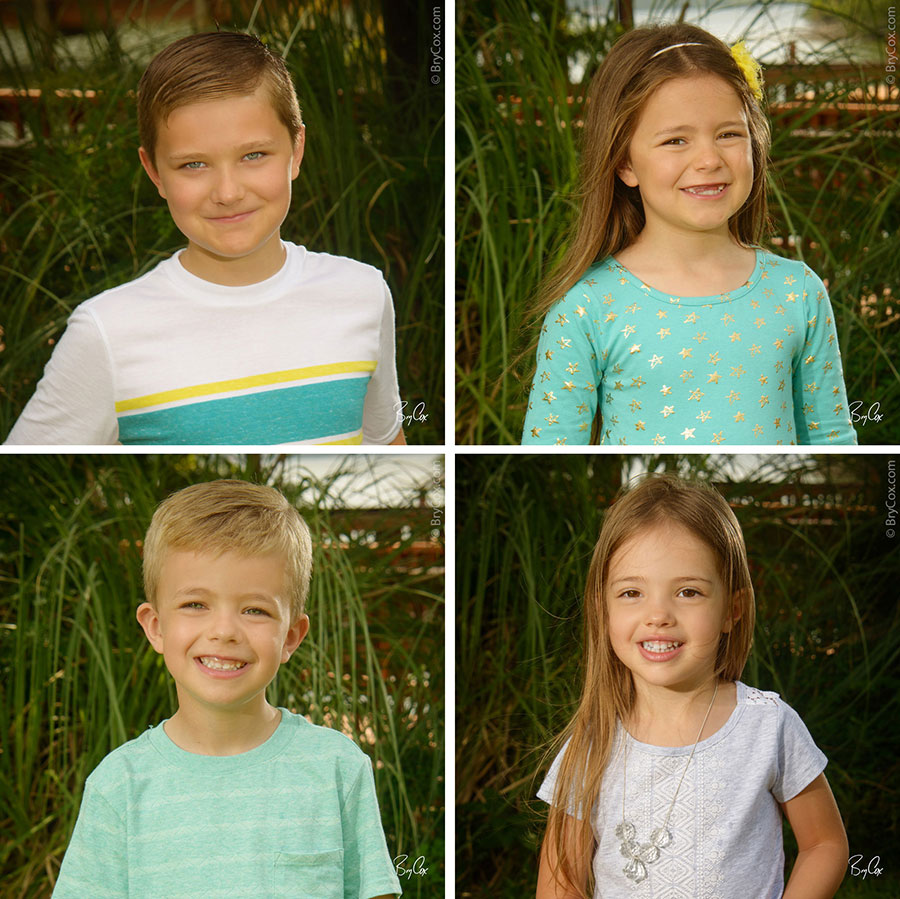 This beautiful little girl was getting baptized, so we created these images in her white dress to commemorate this time in her young life. I really love these images and her beautiful expressions and poses in them. 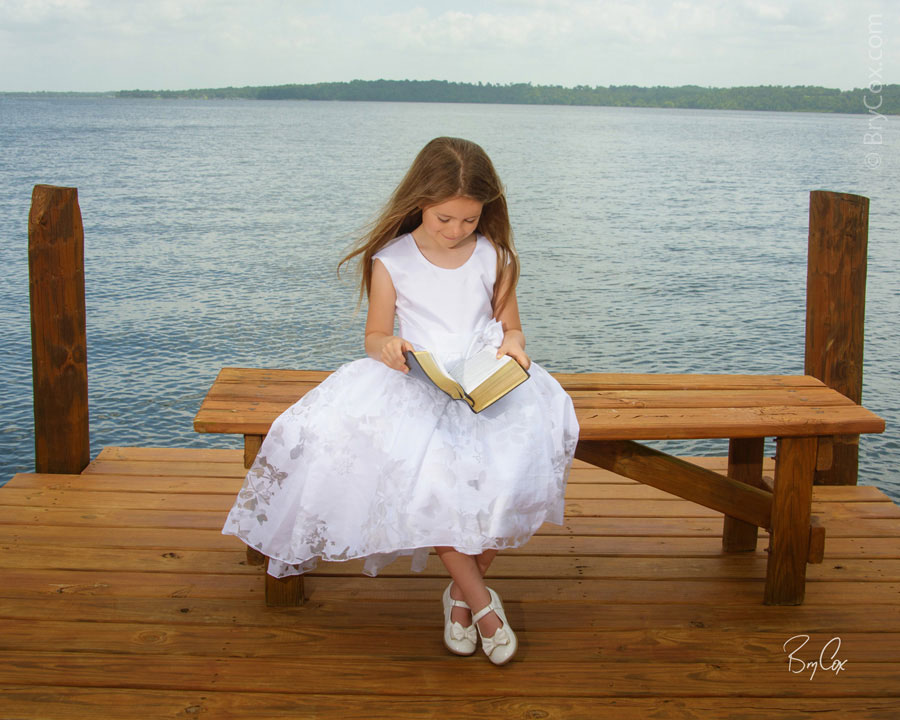 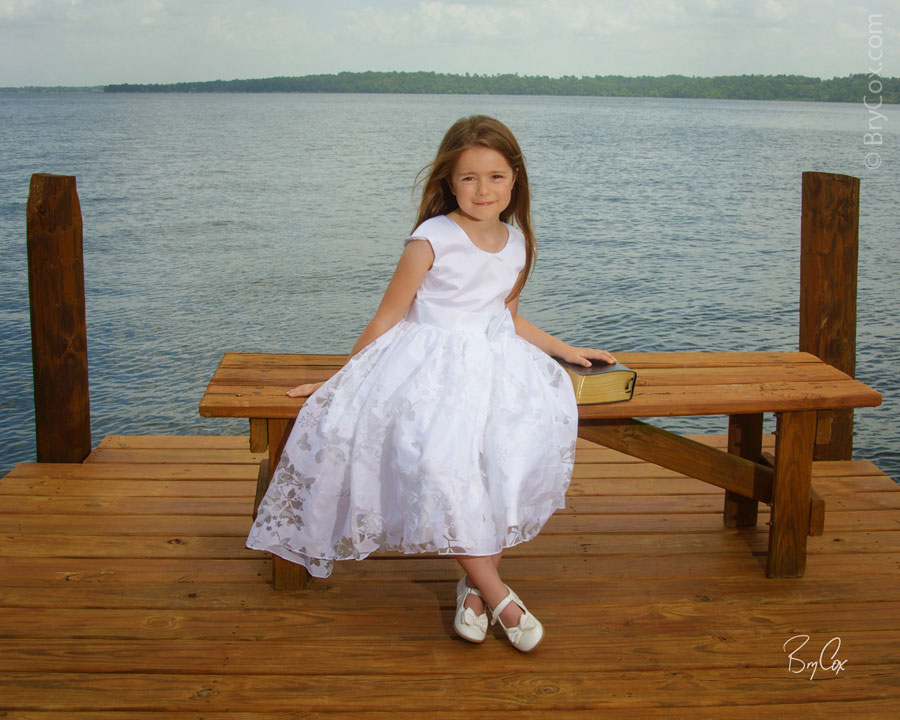 And finally, I created this trio of her funning to capture her youthfulness.

I’ll share more from this extensive shoot soon. But in the meantime, if you’d like some family portraits, give me a call at 801-728-3317. Let’s talk about your dream portrait and get something scheduled before the weather gets cold.

Fall is here and the leaves come and go so quickly. This year I’m doing some special dates for families in two different canyons, Salt Lake and Ogden areas. And because I’ll be shooting in the same area each day, the location fee will be drastically reduced. Plus get free Christmas cards with your wall portrait purchase too.

It’s a great time to get a wonderful location shoot in the Utah leaves. We can photograph just your kids, your family, a little of both, or even block out time for your larger extended family where I can also shoot smaller individual families too.

I make family portraits painless. I work quickly, get your kids to smile and look wonderful, and we’ll get lots of variety too so you’ll have great images to pick from. 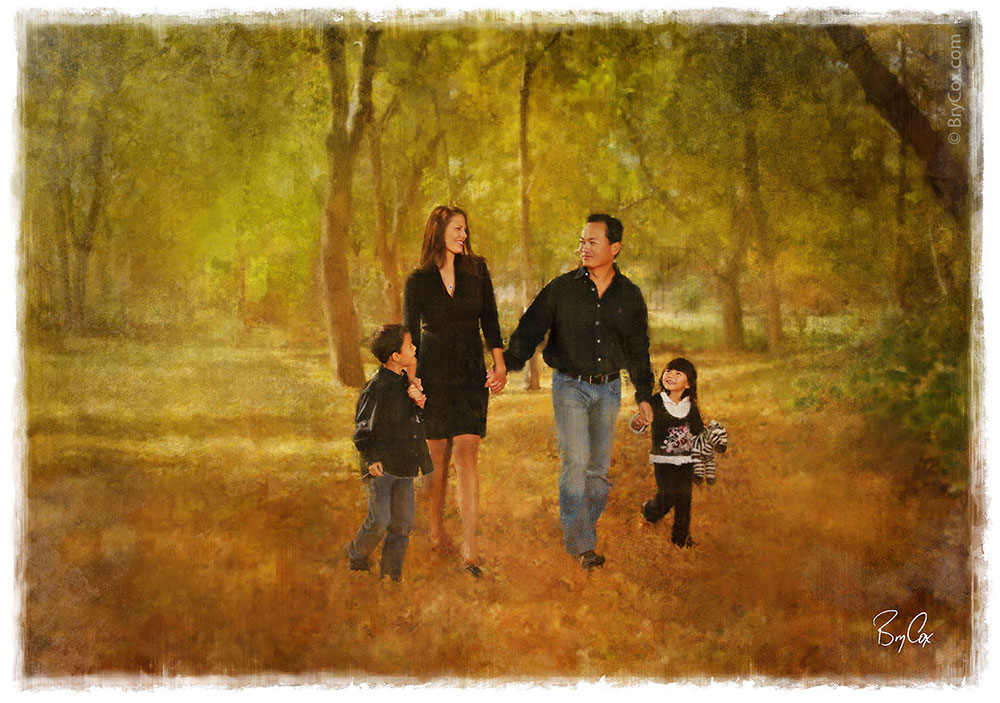 I specialize in emotionally powerful wall art, the best heirloom canvas portraits, paintings, and other gorgeous pieces that change the feeling in your home. 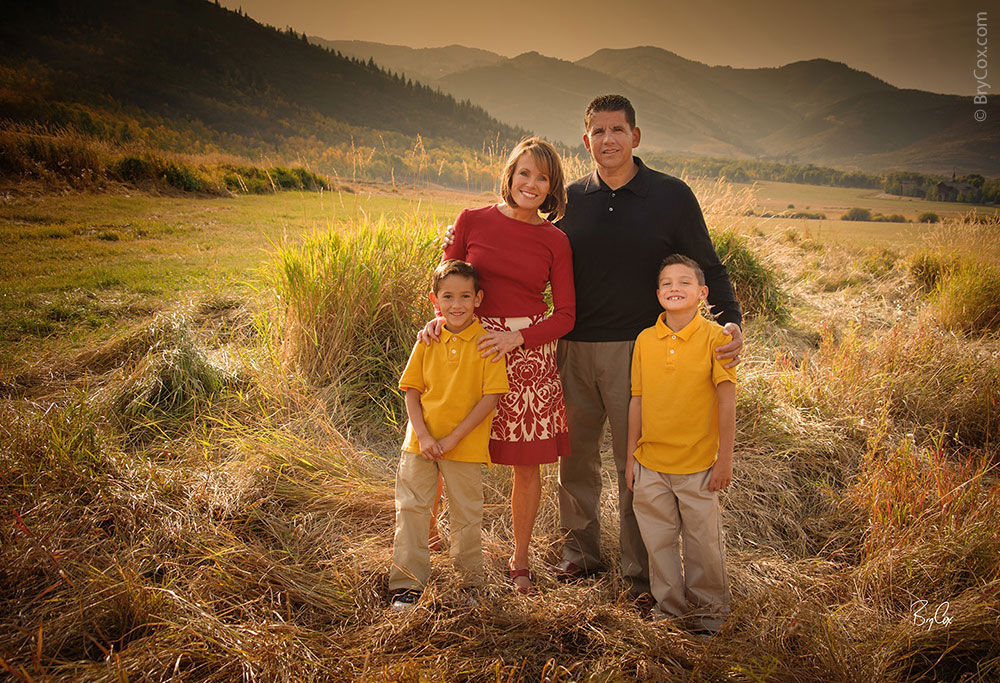 Let’s photograph your family or kids in the beautiful Utah fall leaves, and make up some custom wall art for your home for the holidays. Call me at 801-728-3317.

Amanda and Brant brought their beautiful baby boy to the studio for some family portraits. I love photographing children. I love playing with them, making a connection, and getting genuine smiles and laughs for their photographs.

This adorable boy woke up on picture day sick so he wasn’t his normal happy self. The family thought about postponing their shoot, but I convinced them to come anyway. Picture day always seems to be hard. Things come up, but no matter the problem, I can almost always overcome them in the shoot and get great results. Plus I know that I’m great with kids. No matter how they’re feeling, I can get them to smile and laugh long enough for great photographs.

And sure enough, when this little boy arrived, he was immediately happy. He laughed and smiled at my antics and the shoot went beautifully. In fact he smiled and laughed so much, we all couldn’t help but laugh with him. I really love this shoot. 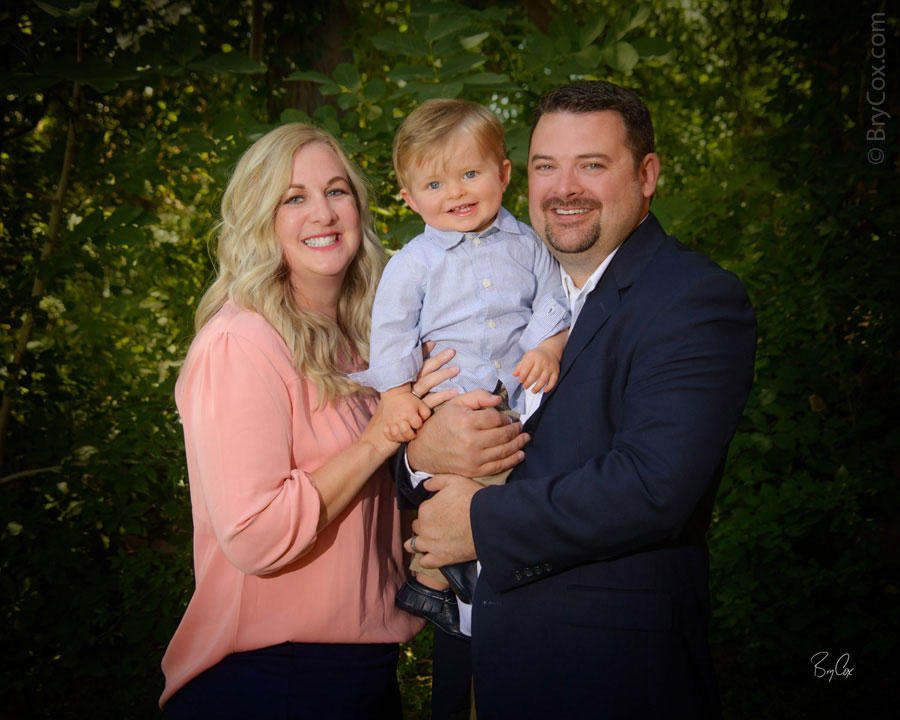 These were all created outdoors right here in my studio gardens. I’ve designed the grounds to have layers of green, so that I’ve got lots of angles for outdoor portraits. So as another family option, I created this painting from one of the walking images. 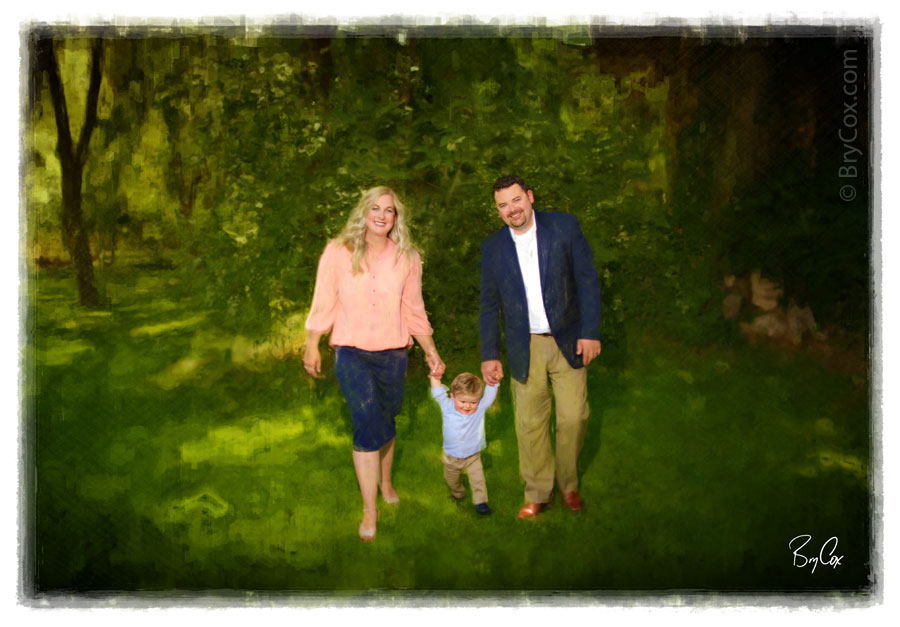 Here is a close up from that same painting to show more detail. 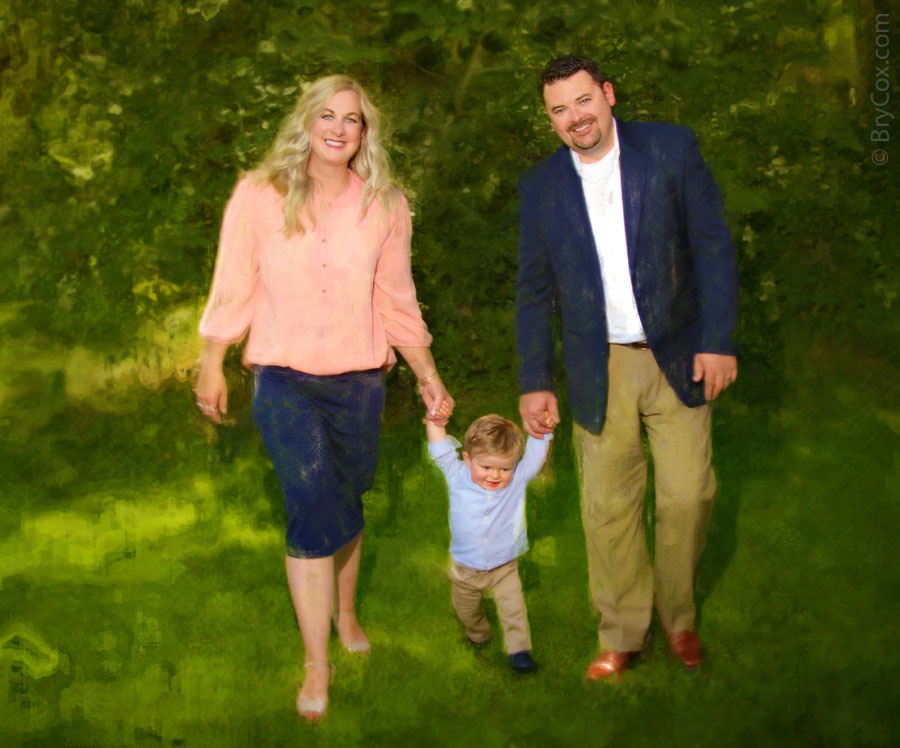 And of course we needed to get some individual portraits of this cute boy. This first one shows some size perspective so that later in life he can see how little he and his hands are in comparison to his parents. 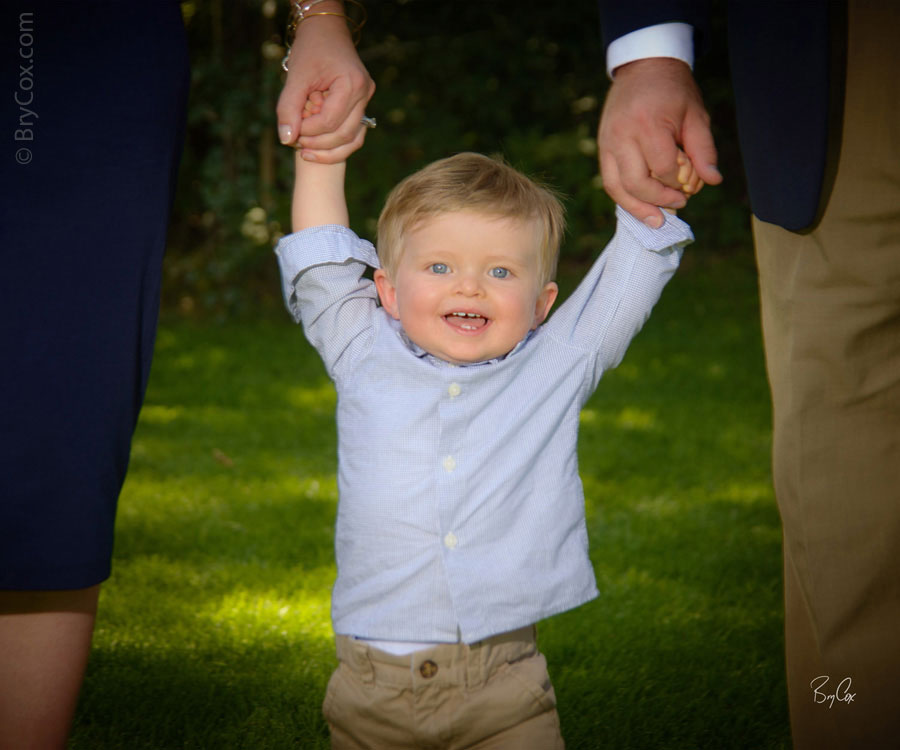 And these are him hanging out, playing, and sitting outdoors, all with a huge, genuine smile. 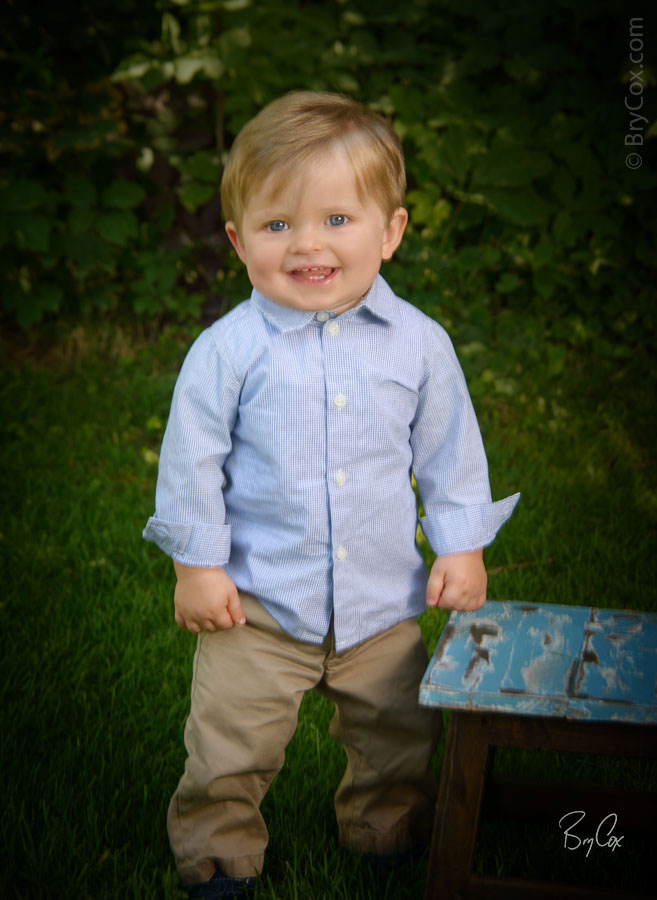 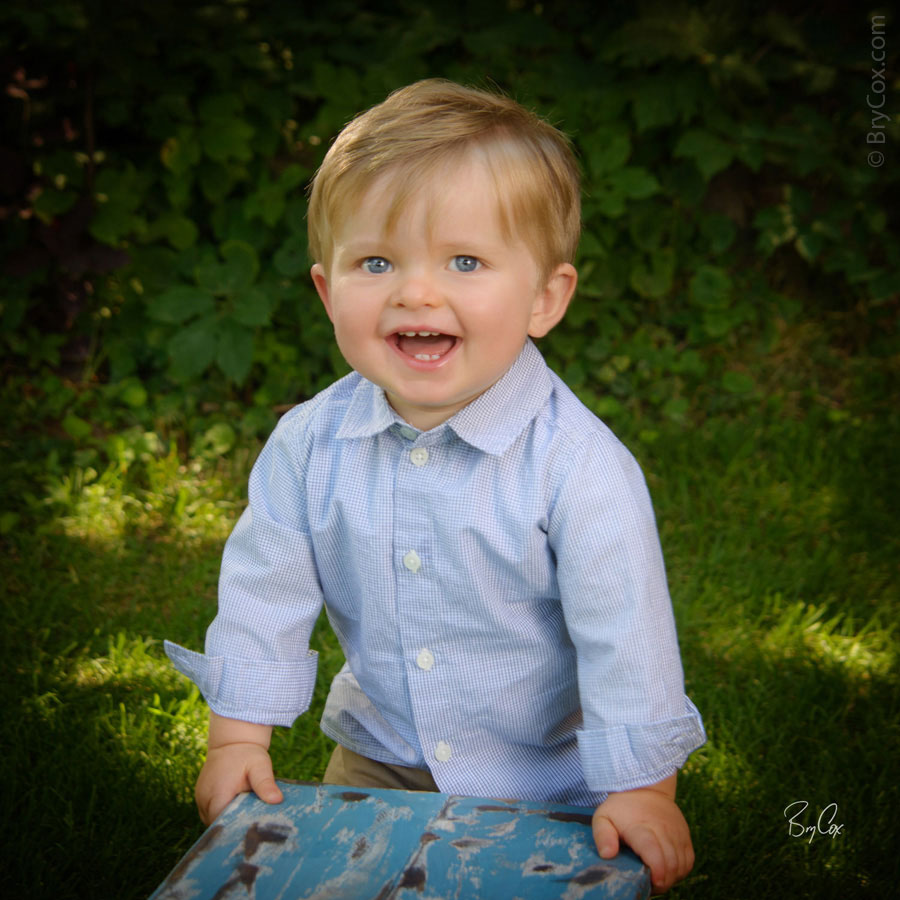 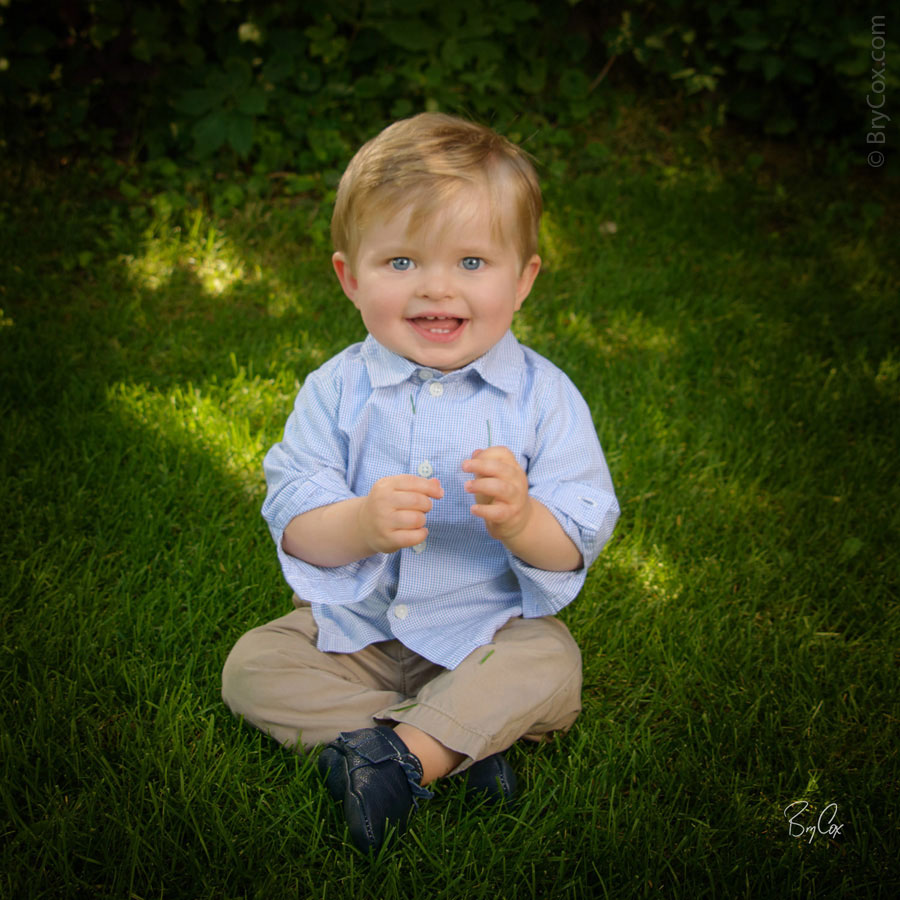 These three images worked really well as a set, so we did this trio. It’s designed and framed, ready to hang on the wall.

Summer is almost over. It’s a great time to get in for some family portraits along with some of the kids. And if you don’t want to travel to distant locations, right here I can do inside or outdoors in the studio garden. Give me a call at 801-728-3317.

The total eclipse was absolutely breathtaking and inspiring. Words really can’t describe the feeling and overwhelming awe of being there, feeling the air on your skin dramatically change, watching the sky all around you go dark, and then suddenly seeing the sun’s white rays burst out from behind the moon in the darkness in an angelic way… it was beautiful!

I’m glad I made the last minute decision to drive the 3 hour route north to see the eclipse in totality. Here at my place in Utah it was going to be 91% which sounded pretty good to me. I debated if that extra 9% would really make much difference. It did.

The local news made a big deal about all the traffic and congestion that would be heading north into Idaho, and their daily talk of armageddon (gas stations dry and store shelves bare) made me want to avoid the crowds and just watch the eclipse near my home.

But the night before, some friends called me to join them on their drive up. They said there wasn’t any traffic and that they had a spot for me in their camp. So excited about the adventure, I loaded up my motorcycle with my bare essentials and some items of preparedness and headed out at 1:00 am to drive through the night. As I got further north, the temperatures dropped to the 50’s, which when going 80 mpg makes it feel like 25º. Freezing. I arrived shortly after 4:00 am, found my friends sleeping under the stars in a farm plot turned makeshift RV park, and I got out my sleeping bag for a few hours of warmth and sleep. 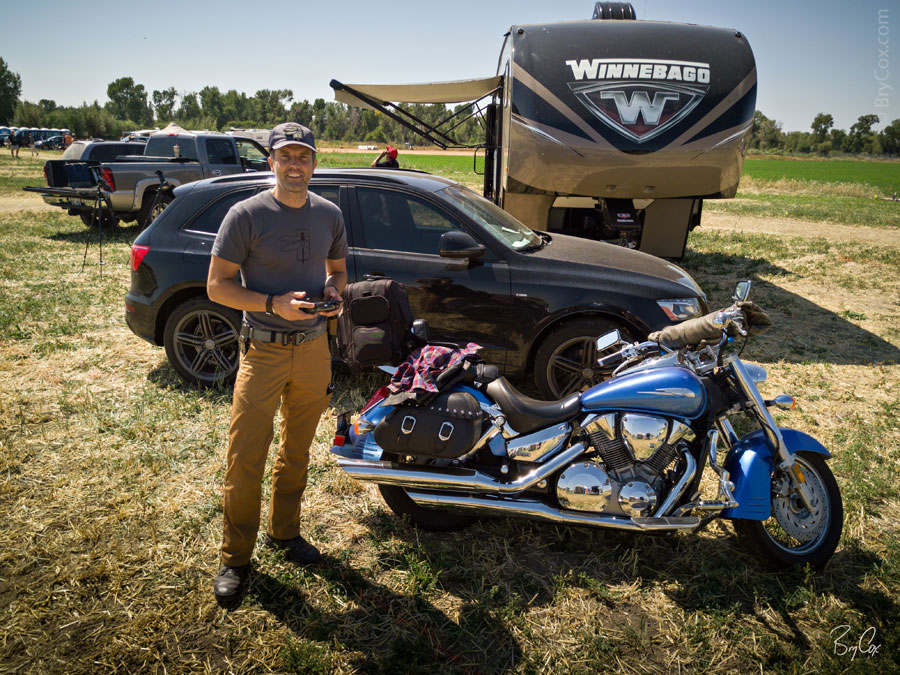 The rising sun in our eyes woke us up and we all greeted each other, made some food, and began setting up to watch the eclipse. I had a sheet of solar film from my friends at Pictureline in Salt Lake, and it was awesome. I had enough film material to cover my camera lens, my binoculars (which were an amazing way to watch), with left over pieces to give to a few close friends for their cameras. 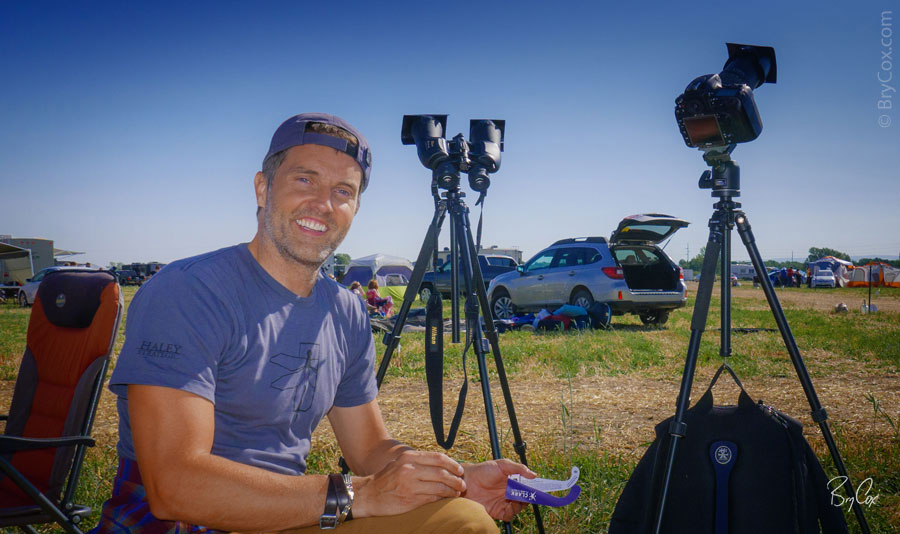 Here a drone shot of us hanging out at camp, watching the eclipse. 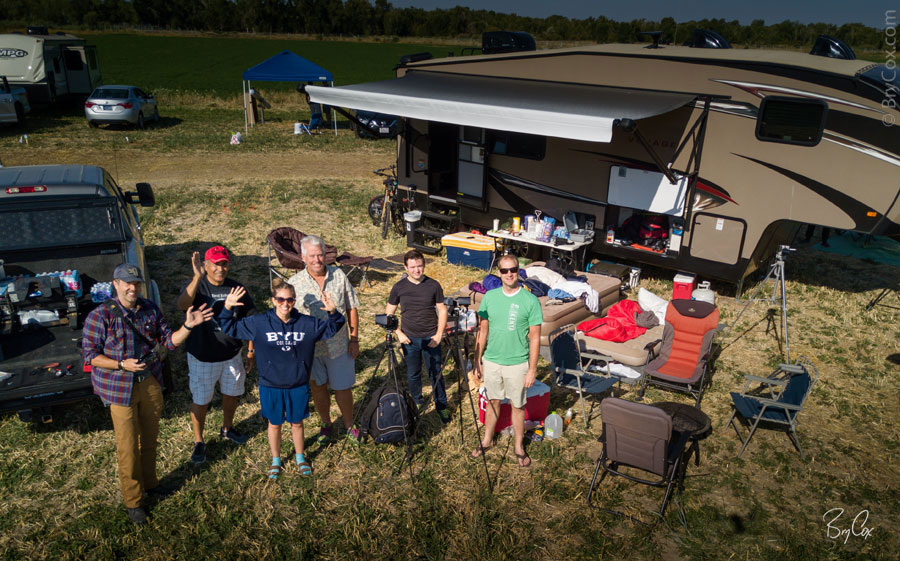 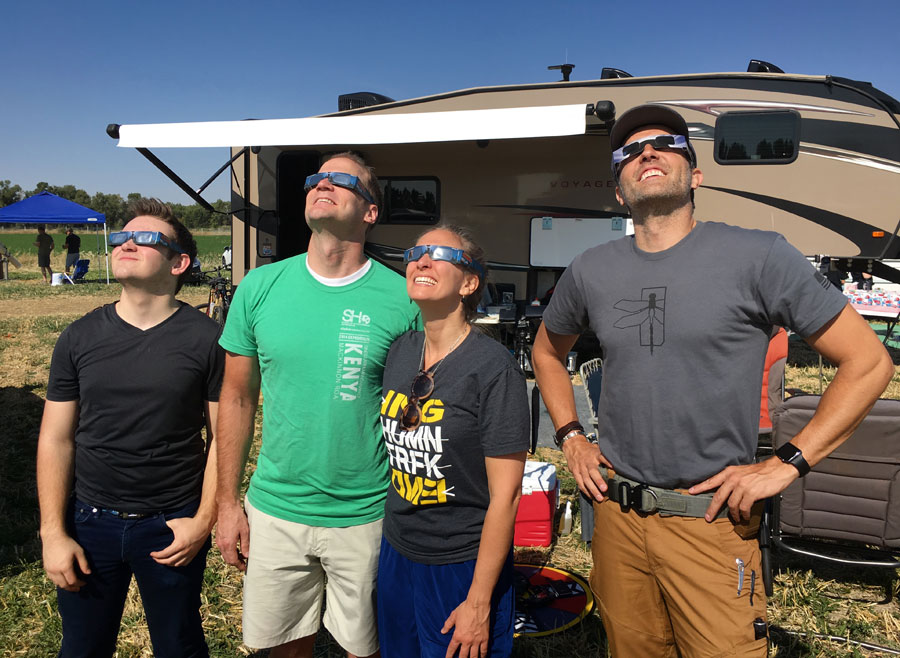 As the eclipse progressed, I created a series of photographs that I later combined into this one-piece collage. Since the moment of totality was such a wondrous experience, that image needed to be much larger. And as much as I like this collage, it is just a reminder of the experience. It doesn’t do the real thing justice. 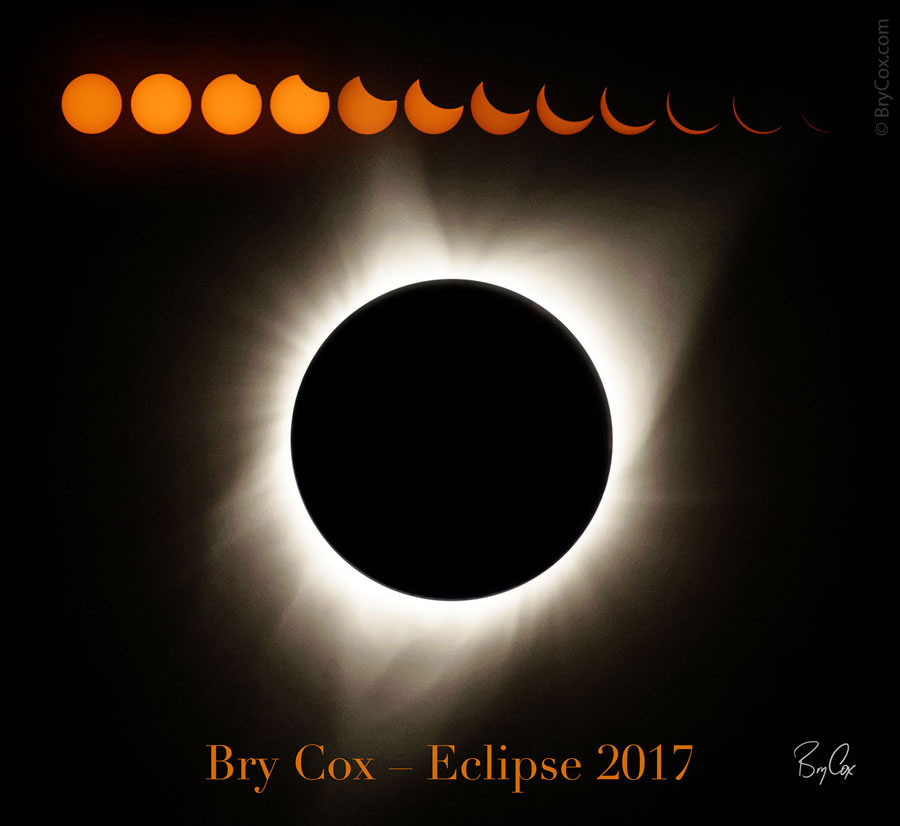 Here are all of the images I did during that procession.

I only took a minimal setup because I was on a motorcycle and hoped to enjoy the event too, not wanting to get bogged down in technology during the wondrous moment. I’m happy with my results, but we met many people at the camp who’d planned for months and years, even coming from out of state for this event. This California man shown below spent years building this elaborate setup, which included multiple computers and analyzers to track the sun and adjust for micro movements. And with all that equipment, he forgot to remove his solar filter to get a photograph of totality because he was so engrossed and blown away by the experience as it was happening. Only afterwards did he realize he forgot to photograph it. 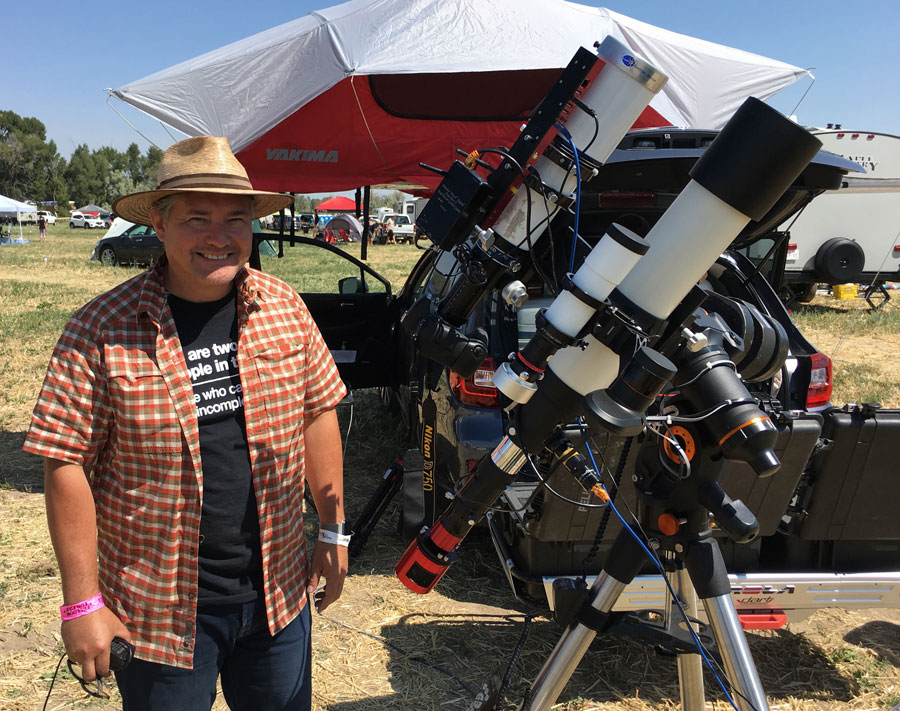 I flew my drone around the area during some down time, and shot the nearby country side and the snake river running right past us.

Then to avoid the horrible traffic being funneled down the only road south to Utah, we instead went bridge diving with some other friends we met up with. 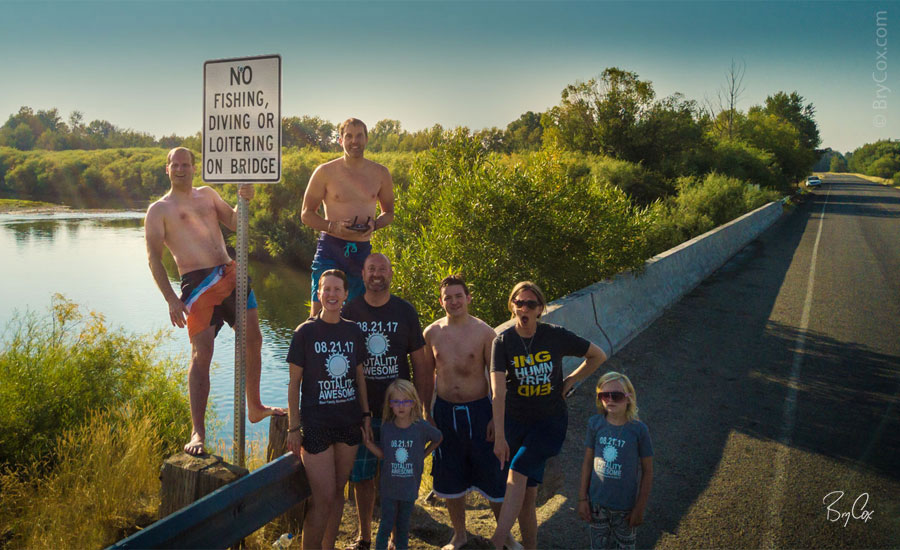 Here’s a video clip of us jumping, shot by flying my drone out above the water.

As it got later, I thought the traffic would be clear enough to go. Plus I wanted to avoid another cold night’s ride home. I packed my bike and headed out an hour and a half ahead of my friends. …and I hit horrible traffic. It took me 7 hours to drive the normal 3 hour route. There were no alternate roads, no turnoffs. Just one long 200 mile road in gridlock. I even got a ticket for what I consider normal motorcycle driving (i.e. passing gridlocked cars).

Nevertheless, I am so happy that I made the drive north to see the eclipse in totality. It was worth the photographs, but more importantly it was worth the experience. The difference in the last few moments (95%) when it just felt dim outside and the sun was still pretty bright without the solar glasses, versus that moment of totality when the sun burst out in a bright angelic way from behind the moon was spectacular. It lasted only a few moments, but it was an incredible experiment that is hard to describe with words.

I’m grateful I’m a photographer and lived close enough to be able to experience such a wonderful moment with dear friends.