When these kids arrived, it was a typical scene where one of the kids (in this case the young boy) didn’t want to be photographed. He cried and carried on about it, and didn’t want to change into his gray sweater and in fact he wouldn’t stand anywhere in the studio without collapsing and crying. But my specialty is exquisite lighting and emotion, meaning that I’m not just going to nail the lighting and technical aspects, but I will also draw out real expressions. I love winning kids over and have worked on it my entire career. In fact I have an entire routine now from years and years of playing with my pink pig puppet in the studio. One of my friends who has moved away, has a few times called me by FaceTime just so I could do my pig puppet routine for her little girl again.

So when this cute, sad guy wouldn’t cooperate, I told him he could keep his white shirt, he could be as sad as he wanted, and he could even have his mom by him. I just needed him to stand here so I could show him my pig puppet.

This was just the warm-up. Within three images I had him laughing, all that’s all I wanted at that point, was for him to relate standing in my studio to fun and laughter. So at that point I let him go and continued to photograph his sister. She was adorable and cute, and really held her poses well. She was a young model and was warmed up before we started. 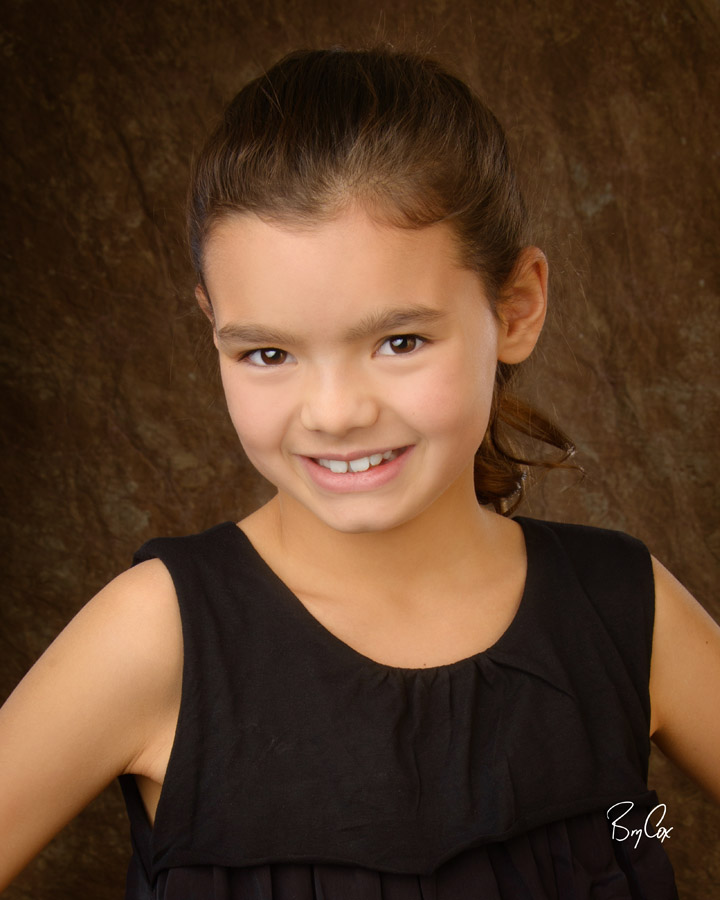 When it was her brother’s turn again, he was a breeze. I had him won over. We got him in his sweater, he sat in his chair while I moved around the studio adjusting lights and getting things set for him, and when I started my pig puppet routine, he laughed and laughed right on cue. From that point on, he never stopped laughing. I changed setups, I shot black and white, I changed backgrounds, and each time it was his turn, I would start my silly puppet routine and he would laugh. Notice how he’s almost falling out of his chair laughing in some of these photos. 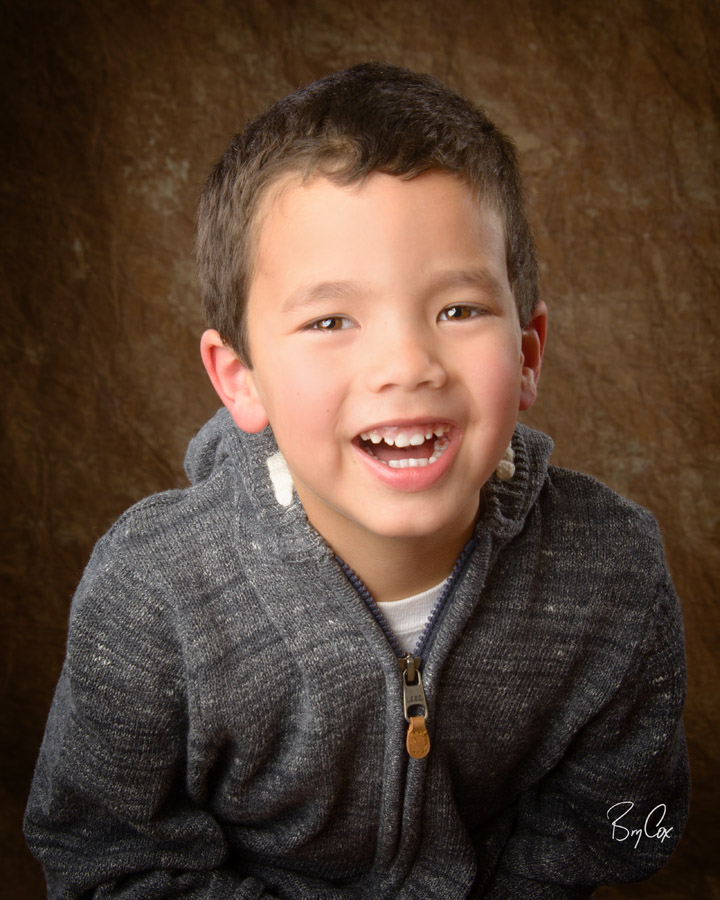 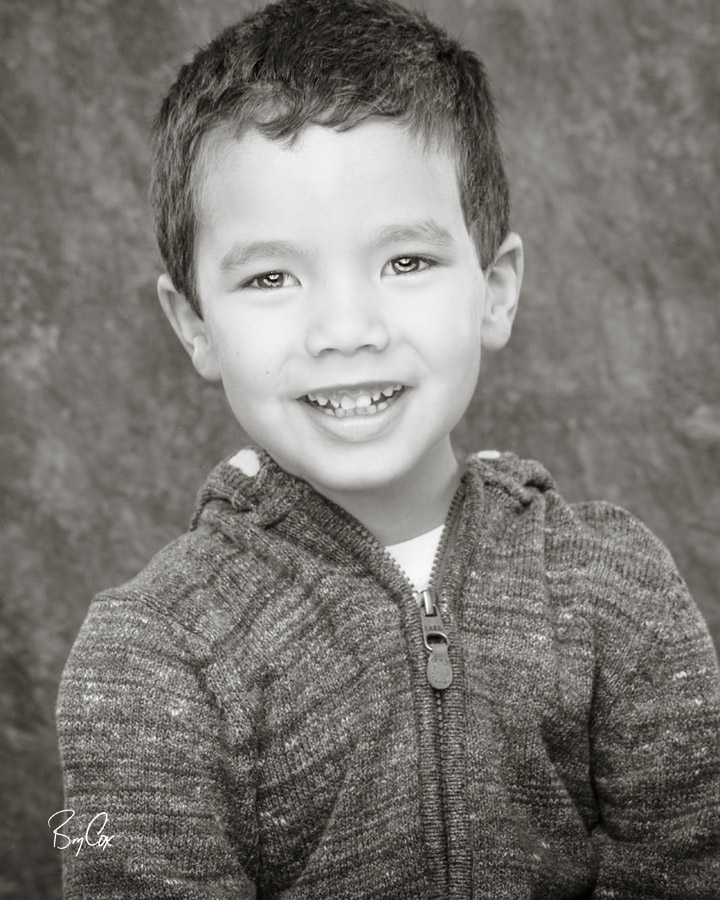 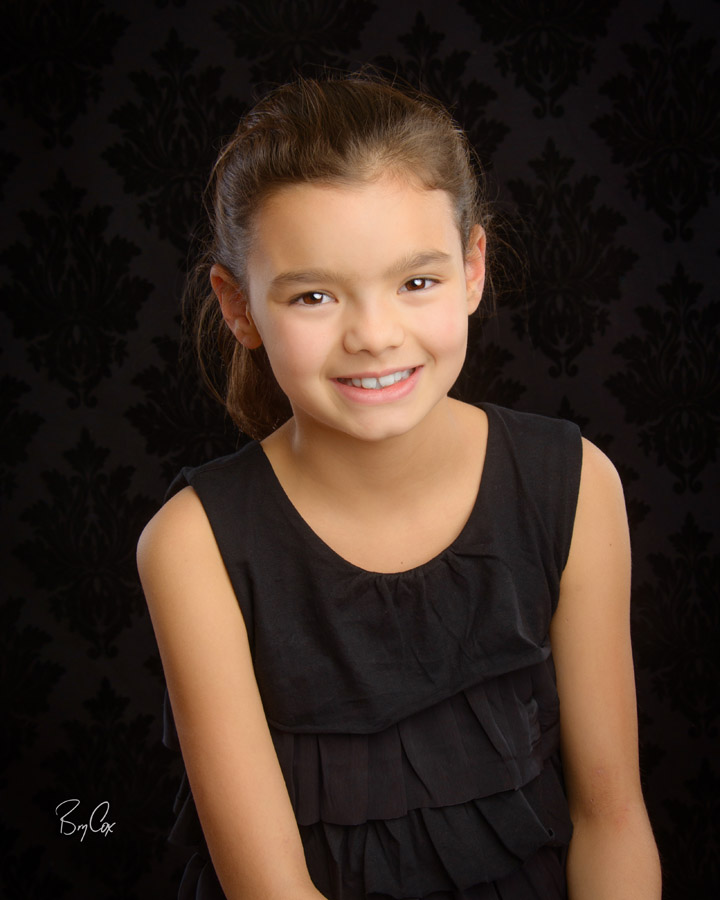 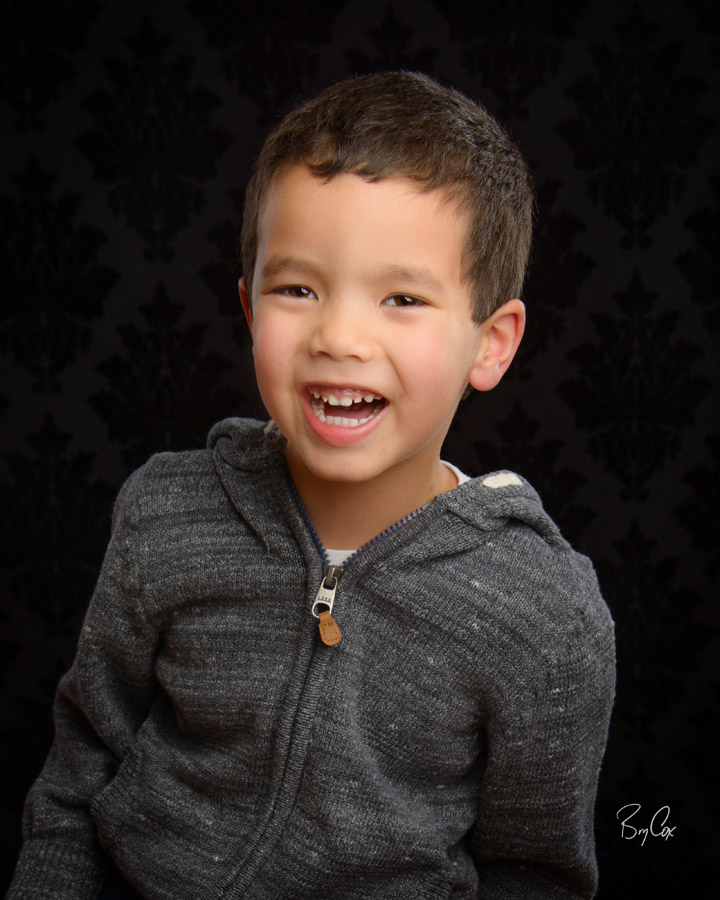 When it came time for a family group portrait, both of the kids did a great job and we were able to get a great image of everyone. And when everyone left, this little guy was drunk with laughter. He could hardly stand straight. It was so funny, and completely opposite of how he arrived. 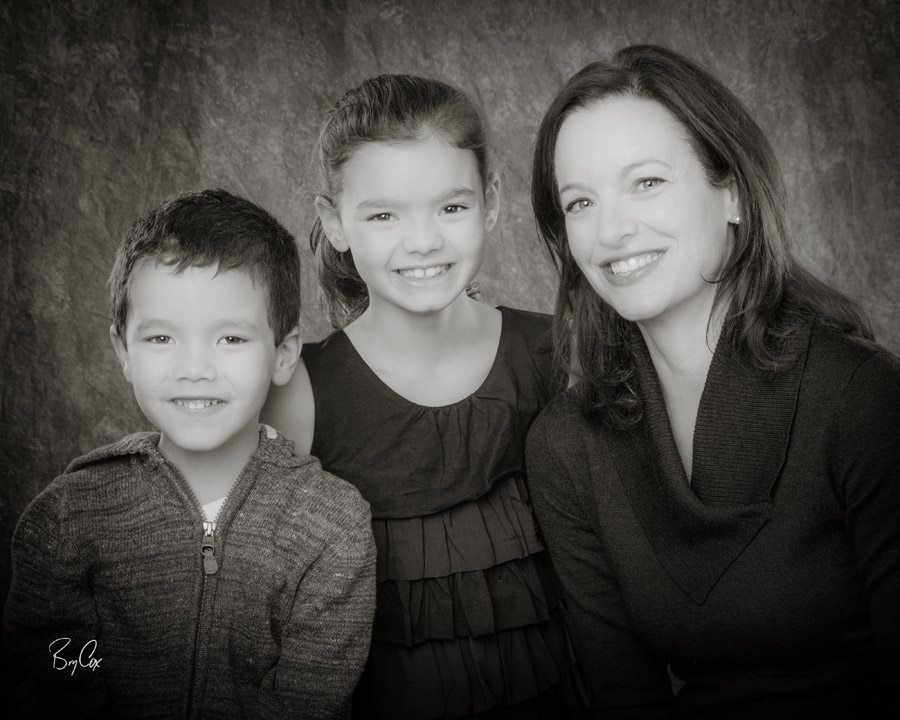 I love photographing families and children. If you need some great family or kids portraits, now is a great time. The Christmas rush is over, and I can fit you in quickly, 801-728-3317. My studio is located just north of Salt Lake City, Utah, and no matter what the weather is like outside, I can get great images in the studio. And many times you can view them right after the shoot too.

And make sure you check out ideas on my main website too, at BryCox.com. Happy New Year, and until next time, America.

I love photographing families and creating unique pieces of art for them, and my painting line is definitely unique. Starting with a photo for reference, this painting is created from scratch with no computer filters or quick effects. They are stunning to look at in person, but are hard to describe online, so I created this animation showing some of the steps of how this painting came together over time. It starts out very rough and abstract, and slowly comes together. When I finish the piece, I like to leave a lot of the rough, abstract brush strokes around the edges and throughout the background. It gives it a very etherial look, and makes it hard to mistake it for a photograph. However the faces are always very detailed.

These paintings are available in a variety of sizes starting at 20 inches, and are perfect for outdoor fall family portraits. Right now is my fall family portrait special. All the details are on the past blog post, but here’s a link. It’s a great time to get in for a shoot while the weather is great, and before the Christmas rush. 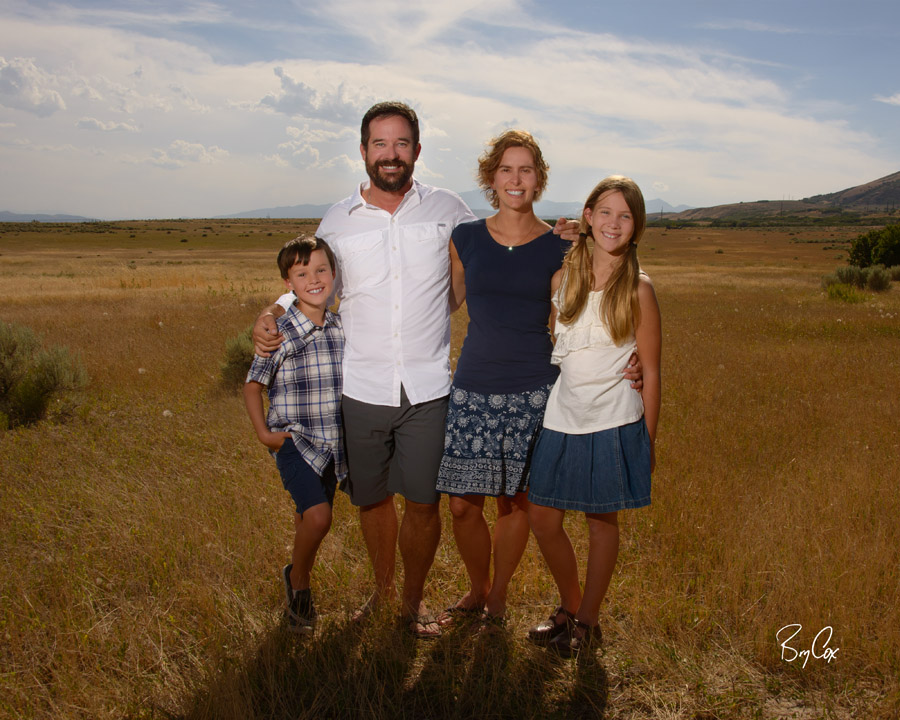 And aside from shooting for a painting, together we’ll create some great images of your family during the shoot. I have great options for outdoor portraits at my studio, but this image was created on location at a spot near this family’s home. This family was so nice and fun to work with. The weather was actually very hot during this session, and for most photographers that would mean bright, washed out skies and blotchy sun marks on the skin which means most photographers would probably make the image black and white to hide their problems. But light is my specialty, and I set up some powerful and direct lighting to bring add dimension the family, while at the same time darkening the sky. The result is a beautiful family with warm, beautiful skin tones, lots of spacial dimension, a gorgeous sky with dramatic clouds, and a field full of warm vivid colors. 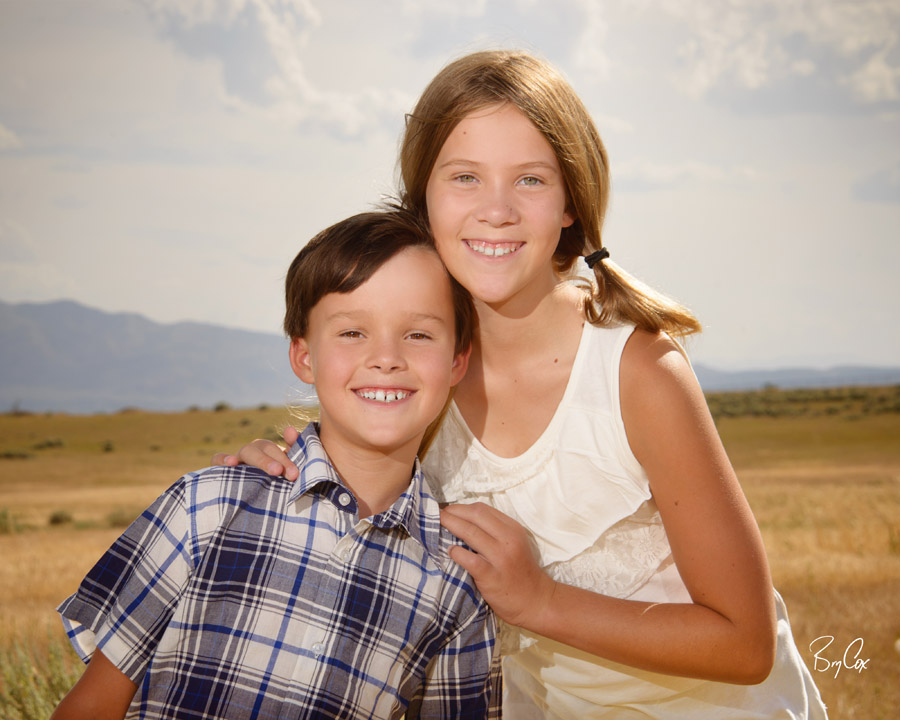 After the family portrait, I like to focus on the kids. These kids were very smart and funny. I was amazed at the advanced subjects they were studying in school. And I really like the real and natural expressions in each of these images. 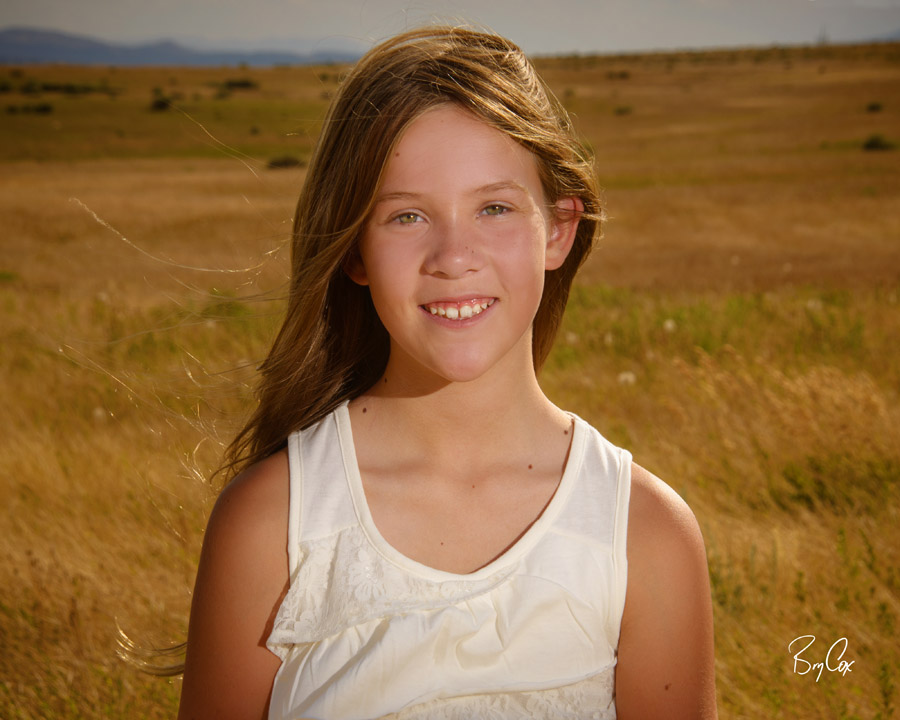 Being a Utah based photographer, we have so many options for outdoor locations, especially in the fall. So whether you want a family painting, photographic portrait, or want to shoot inside the studio or outdoors, I know you’ll love what I create for you. Fall is here and it’s a great time to get in. Beat the rush and call me today for the best dates and availability: 801-728-3317

Check out the details of the fall family special, and feel free to check out my main portfolio website for more samples, BryCox.com.

We had such a fun time creating these engagement portraits of Shasta and her fiancé. We did a mix of outdoor and studio portraits and some of our favorites were high contrast black & whites from the studio. 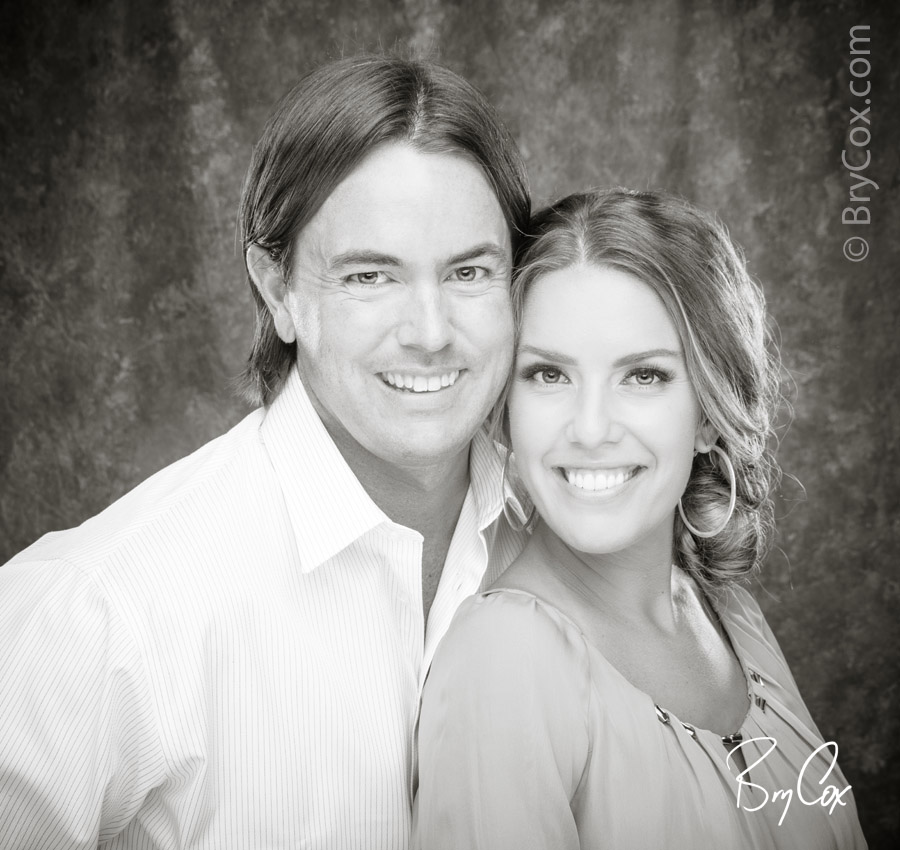 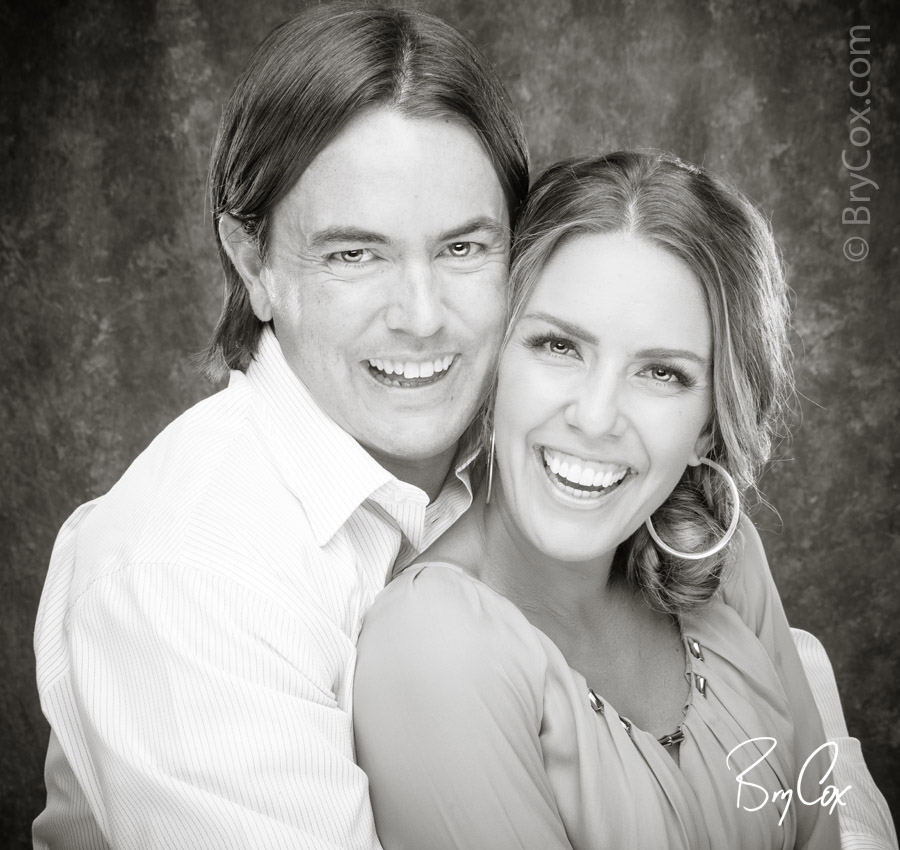 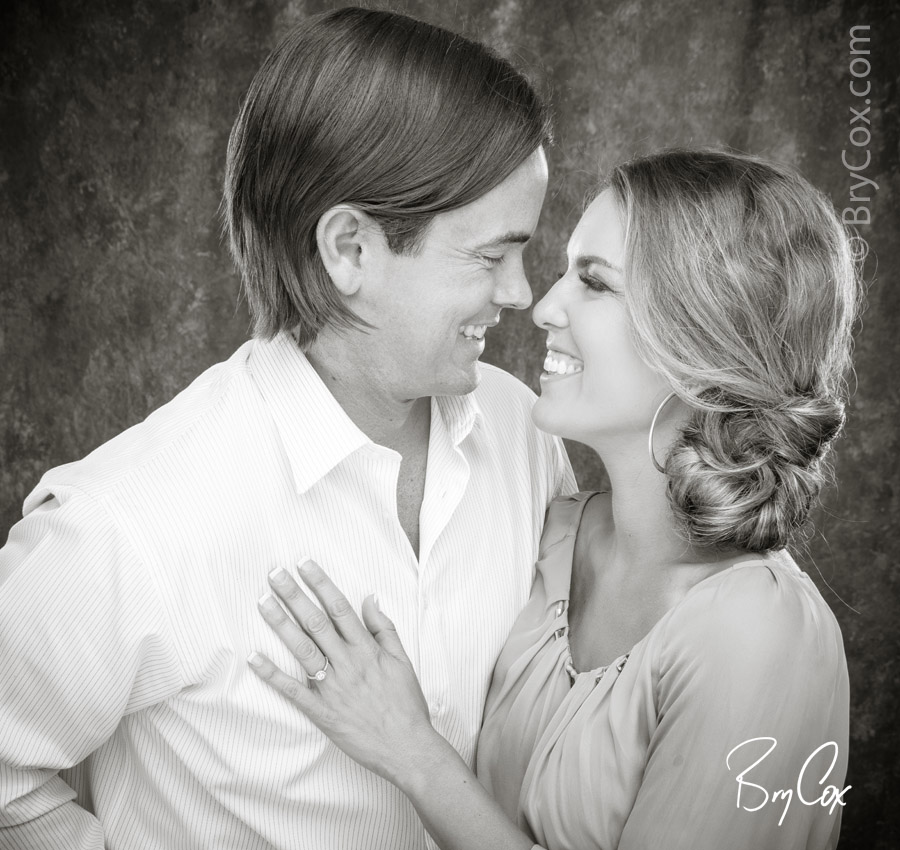 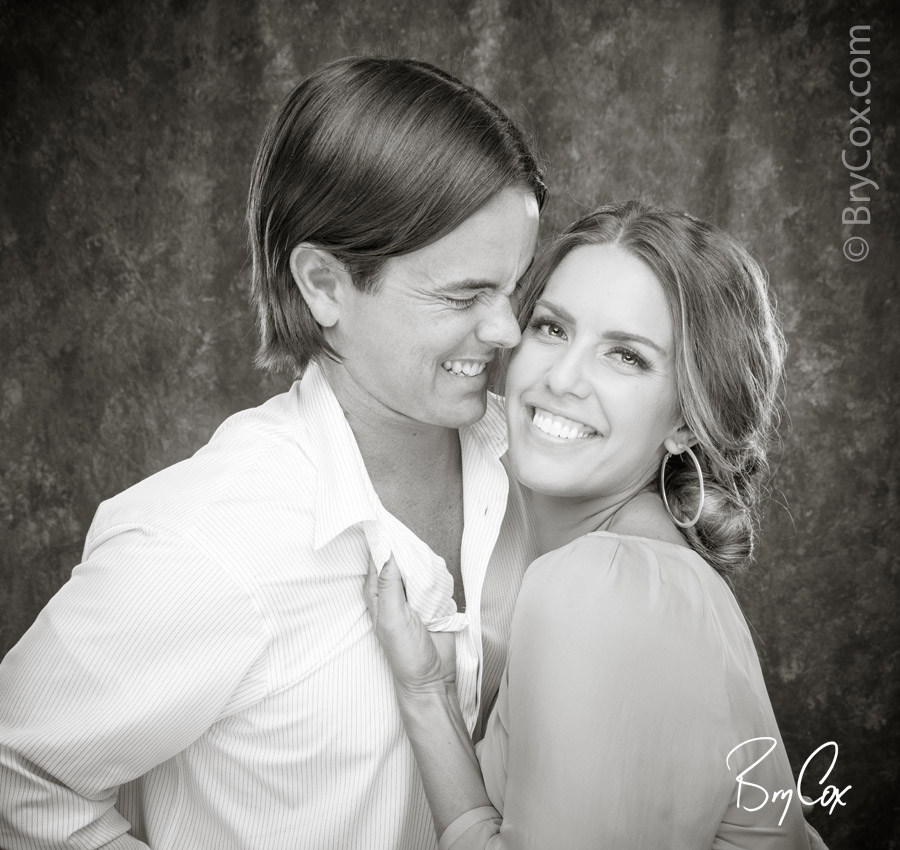 I took some of the favorites and created this 9-up collage. It looked so beautiful when it was finished and framed. 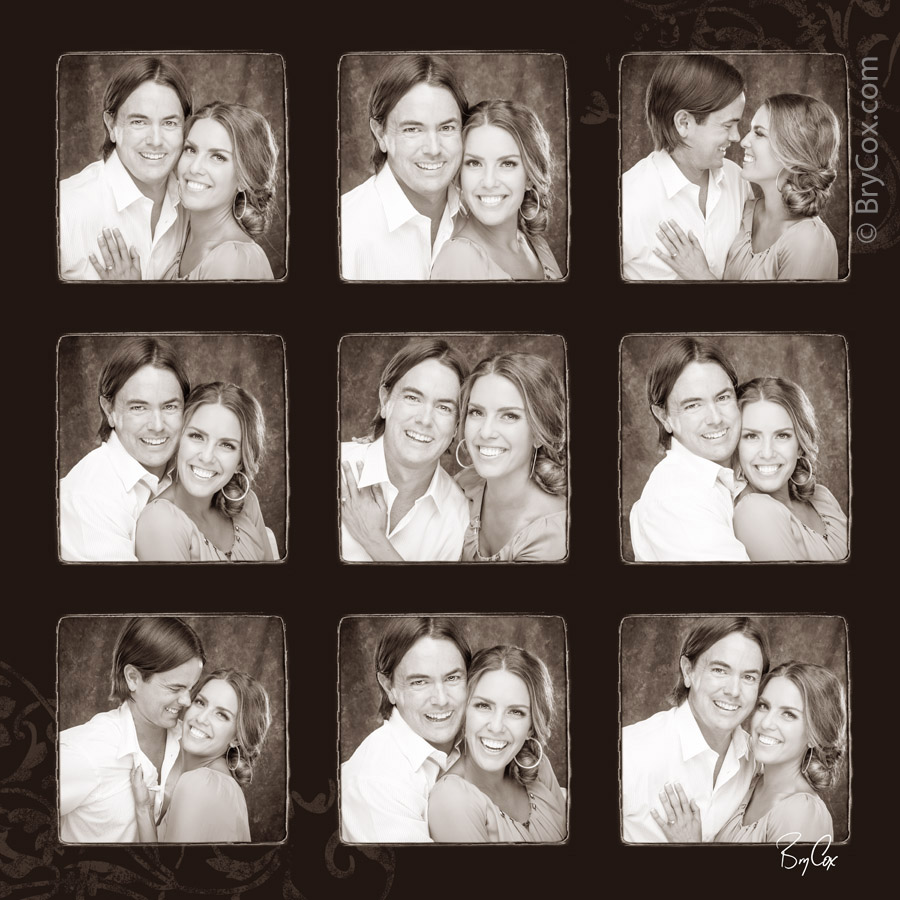 Shasta also has 3 adorable little kids and we took the opportunity to create a new updated family portrait. 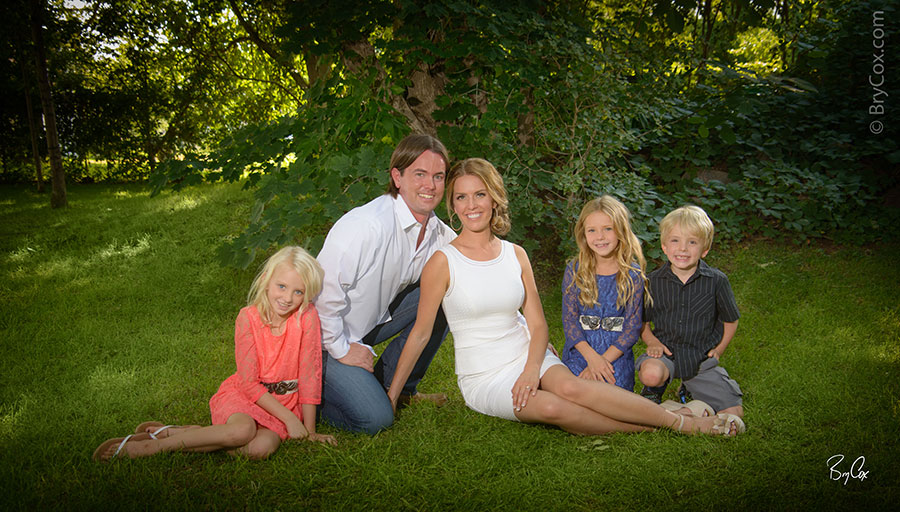 Her kids were so cute and fun, that we did some individual portraits of them as well. I spent most of the shoot laughing with them because they were so funny. I think you can see that in the photos. They each had so many great images and each showed different sides of their personality, that I ended up using a few images of each child to create this collage. 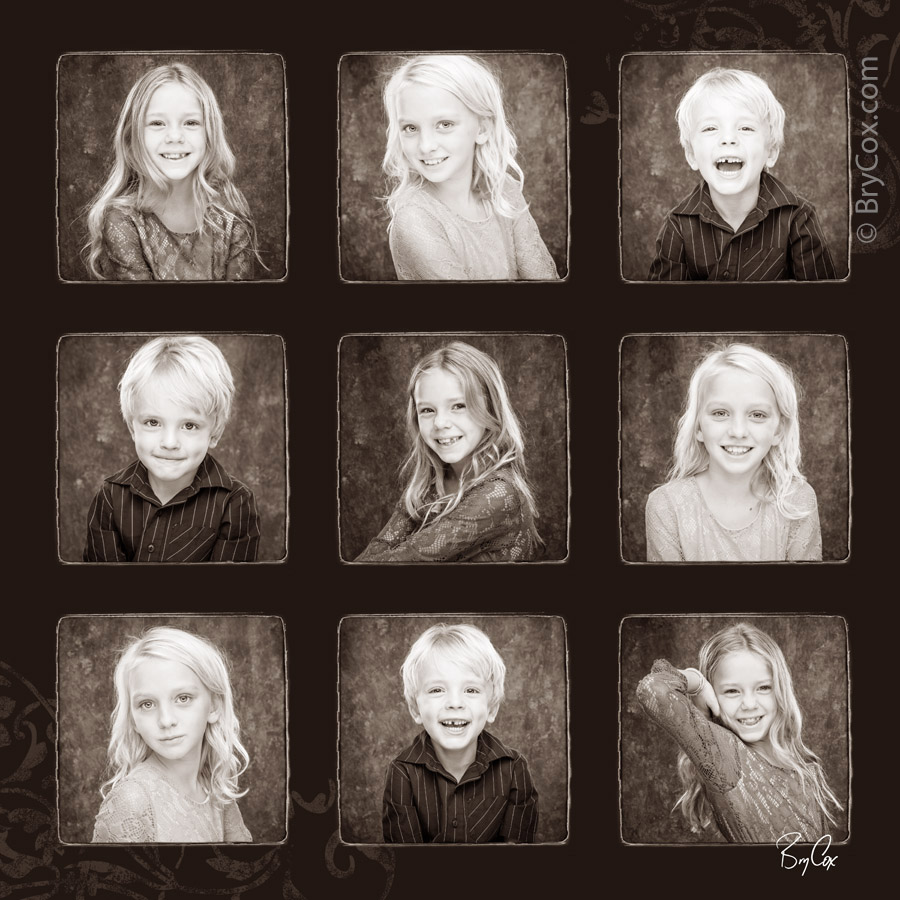 I am excited for this marriage and hope these guys all have a wonderful new life together, and I can’t wait to photograph this awesome family again.

If you’d like some new family portraits, children’s portraits, or even some engagement portraits for your upcoming wedding, give me a call. It’s a great time to come in before the fall rush. 801-728-3317.

Years ago I had the pleasure of photographing the wedding for one of my good friends. Just recently I was able to photograph his family and see how much his cute kids had grown. We shot everything here at the studio, outdoor in the studio gardens. 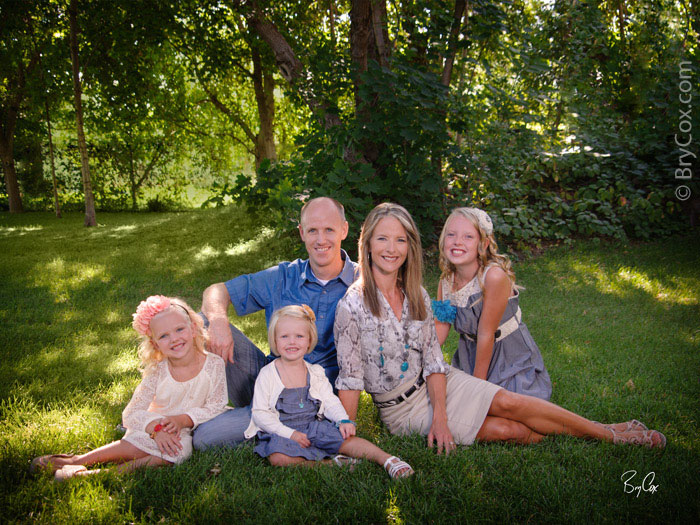 These little girls were so fun and adorable. We took some time during the session to create individual portraits of each girl and some groupings of them together as well. One of those groupings I used to created this painting. 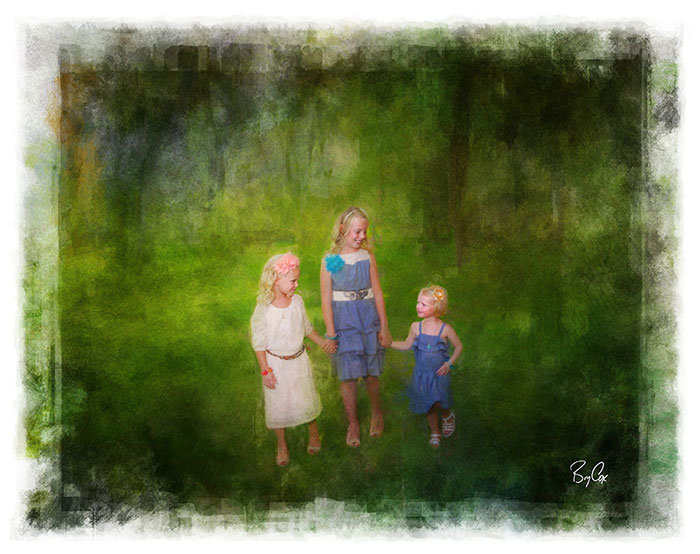 While the painting may portray more of a feeling of being young together, this next grouping shows all their smiling faces. 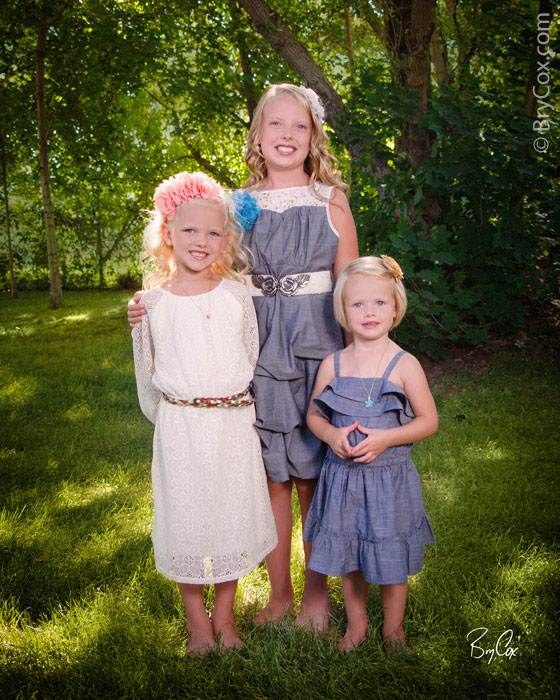 I also really liked this trio of all three girls.

And here are of the favorites of each girl, printed as individual images so that they can be either hung together in a grouping, or later spread out around the house. 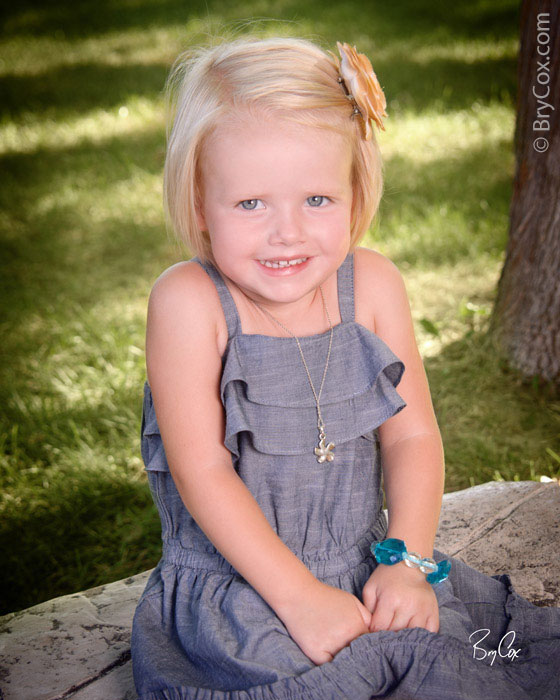 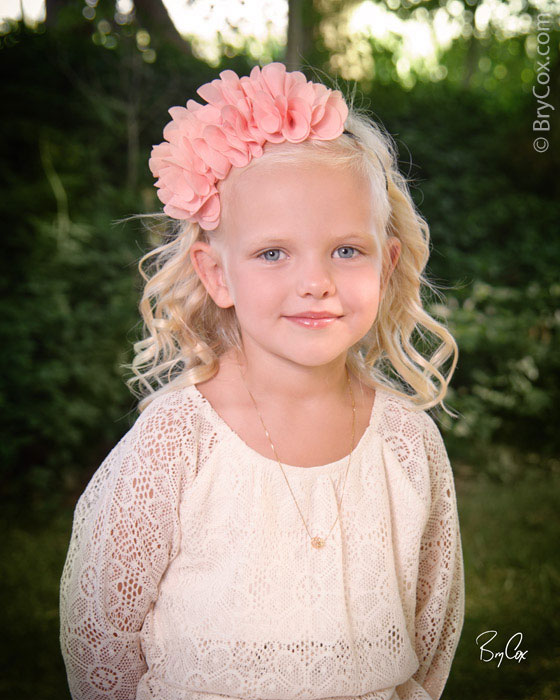 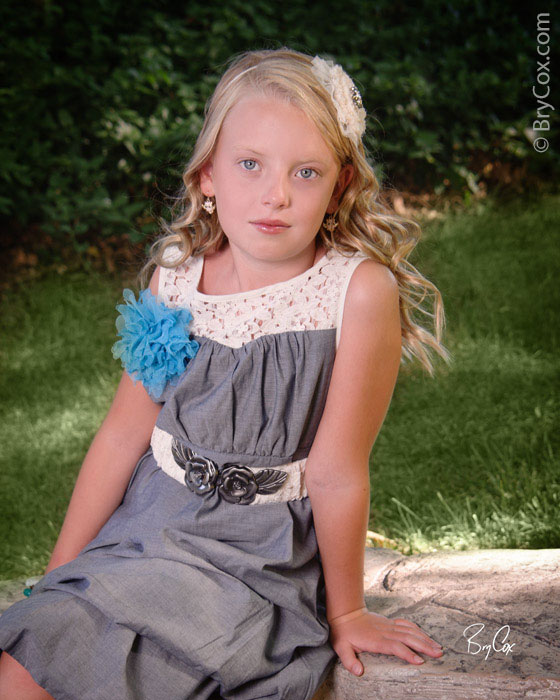 I was interviewed by Professional Photographer Magazine, a publication that goes out to all professional photographers throughout the US as well as other parts of the world as well. That interview is now out in the current October 2012 issue. 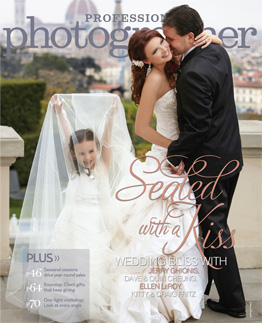 This is the cover (image is not by me), and below are some screen shots of my article where all the images are mine.

The article is humorously titled, “The Anti-Specialist” because where most photographers need to focus on one niche or another to succeed, my particular specialty has been to focus on exquisite lighting and emotion. I mix technical proficiency with a unique style of creativity to develop images that tell a story of the person being photographed, and hopefully makes the viewer feel like they know the person. It’s a uncommon approach that allows me to photograph a mix of genres well, like families, children, weddings, and even celebrities and VIPs.

For the opening spread, the magazine chose my images of Linda Rondstadt and Olympic Gold-Medalist, Rulon Gardner. 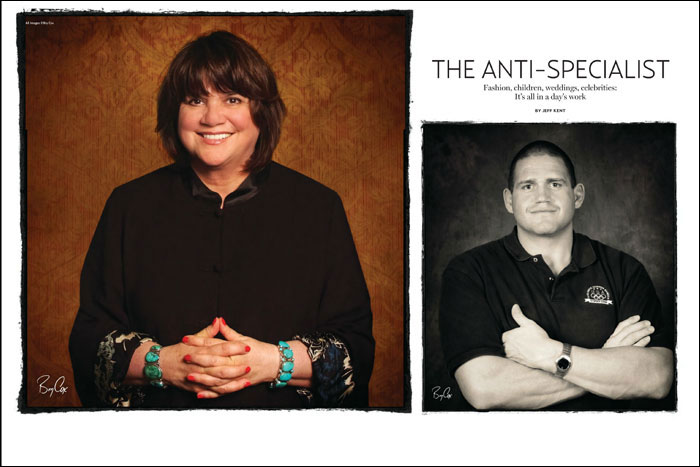 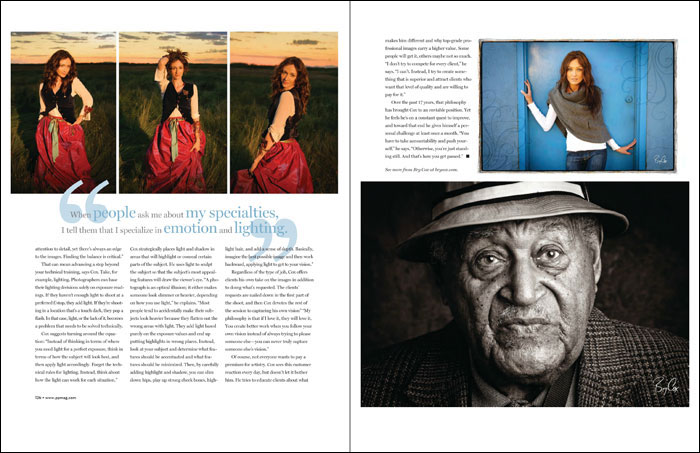 The last image used, is of 90 year old sax player, Joe McQueen. Interestingly, this is the second time this magazine has asked to use this image. I can see why as it really is one of my favorite portraits. It shows dramatically what exquisite lighting and emotion can do to make an image unique and inviting.

I really appreciate and feel honored to have been interviewed for the magazine, and I love the direction they took with the article. I hope other professional photographers find it interesting and helpful.

Well, until next time, America. 🙂

I had the honor of photographing little baby Adelaide before she went in for heart surgery. She was so tiny, cute, and adorable, and was a joy to play with. In fact, it was hard to pick out my favorites, so I took some of her many expressions and created this composite — the many faces of Adelaide. 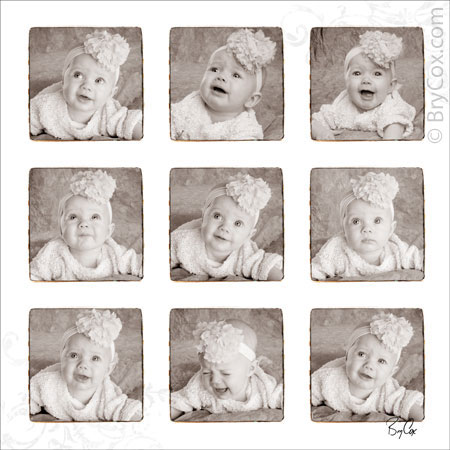 And this series of her playing in her mom’s suitcase full of baby clothes made a great trio design. I love her waving in the 3rd image.

And to finish things off, we did a family grouping with her parents. She was so perfect, she posed and smiled in almost every image, though this was my favorite. 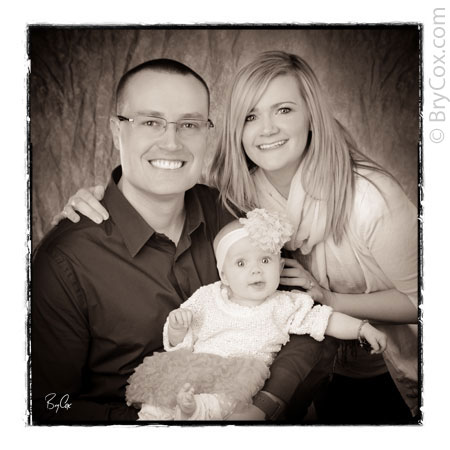 She was really a doll and a pleasure to have in the studio. She’s doing much better now too and I look forward to seeing even more of her through the years.