For two weeks, BlackRapid (maker of the coolest and fastest camera straps) is on a motorcycle tour of the backcountry of Utah, New Mexico, Arizona, and California as part of their #livethemoment mantra. 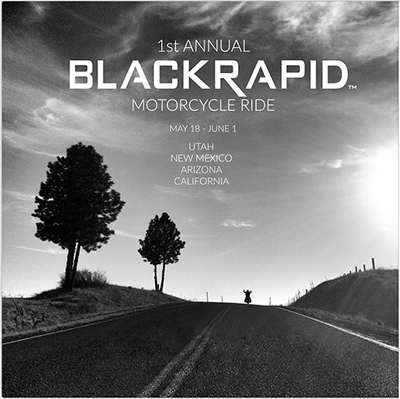 The night before the ride, they used my place to setup and prep for the next morning. And I have to admit that I really liked having these cool bikes in my driveway and parked in my garage for the night. 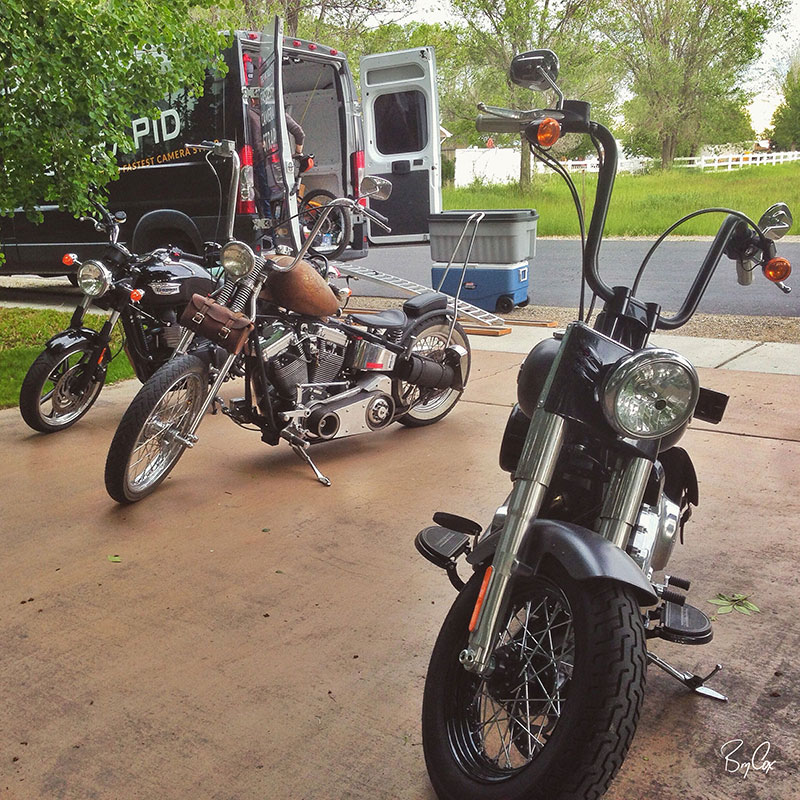 The next morning we had a 70% chance of rain so we trailered some bikes behind the BlackRapid support van while Mike Ridinger and I rode our bikes and we headed out to Pictureline in Salt Lake City for some strap giveaways. 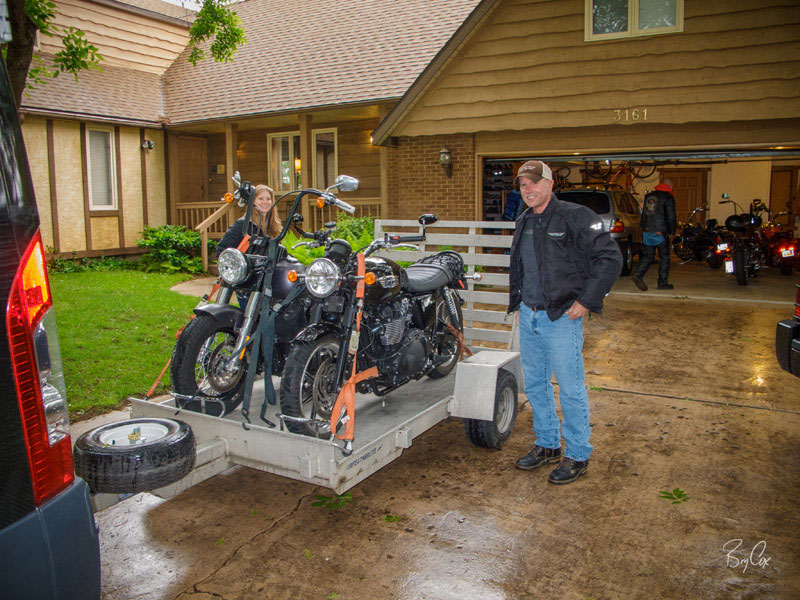 Here’s a closeup of BlackRapid founder and owner, Ron Henry, his wife Shawna, and my good friend Mike Ridinger, a serious and long-time biker. 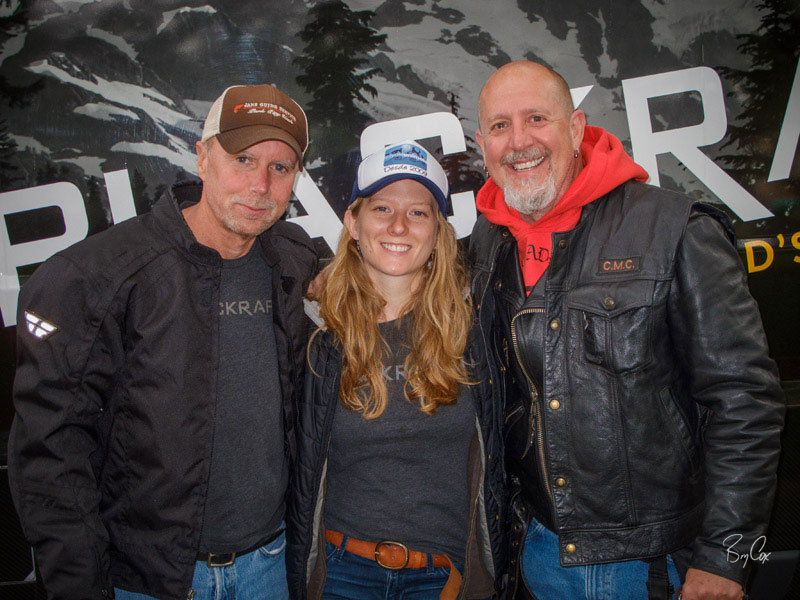 Here’s a shot I took of Mike as we rode into Salt Lake City that morning, with storm clouds looming around us, and a bit of light rain.

Once we arrived at Pictureline, the sky cleared up. Even the weather apps changed to show better weather. Here, the BlackRapid team set up and gave away straps for a few hours, answered questions, and let people try out the straps with their own cameras. 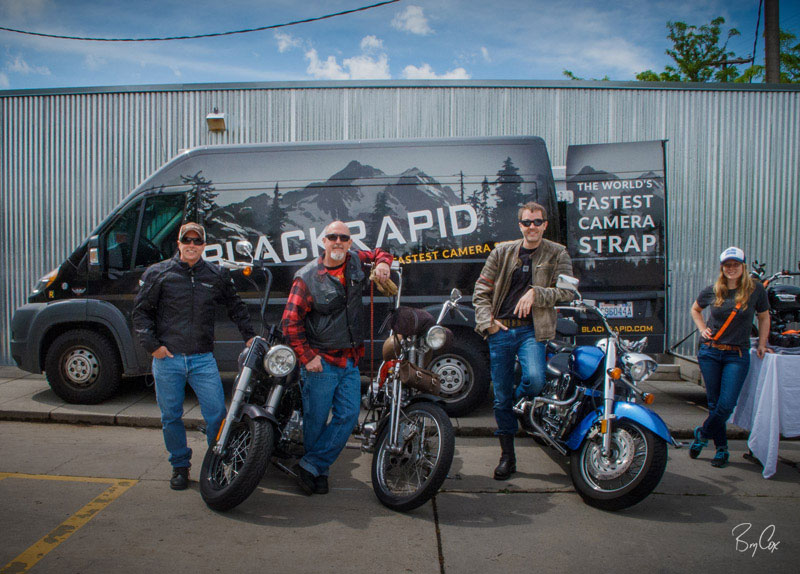 Then by early afternoon we headed south towards Moab. I had to be back for appointments the next day, so I just rode for the day with the team. We had wet roads most of the way, got a little rain, but never anything too bad. In fact we watched heavy storms pass to the right, the left, in front and behind, but never right on us. Here is Ron on his Harley. 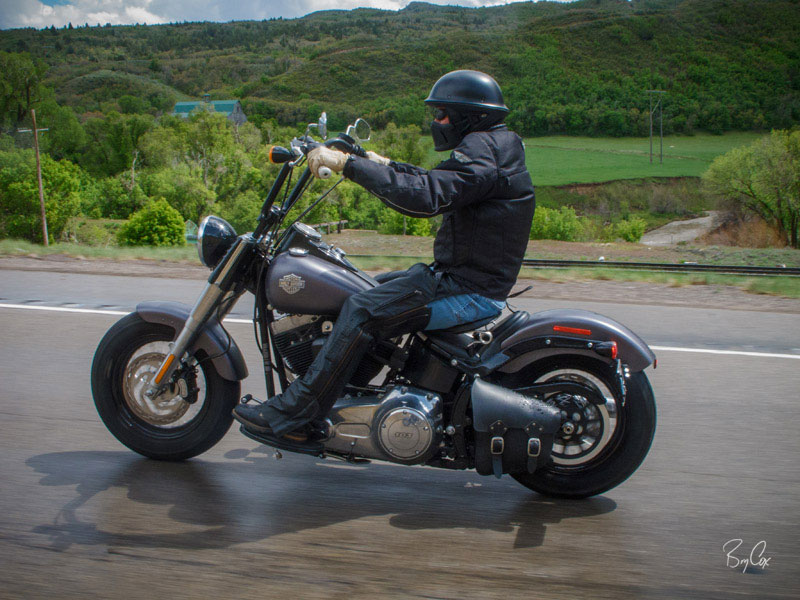 Mike on his chopper. 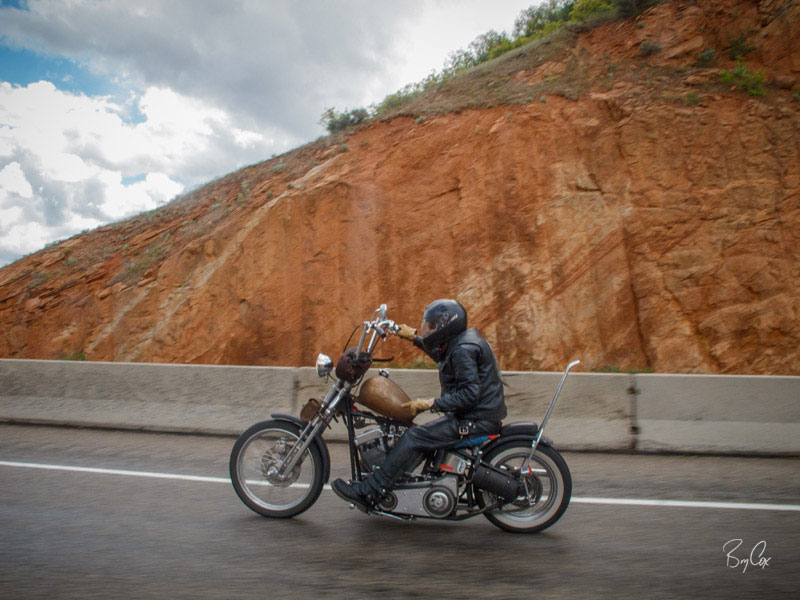 And yes, these were taken one-handed as I rode, using a BlackRapid strap. I didn’t look through the camera obviously, just held it out and shot guessing by instinct on the composition. I really like this one below with my handlebars and Mike and Ron in the distance. 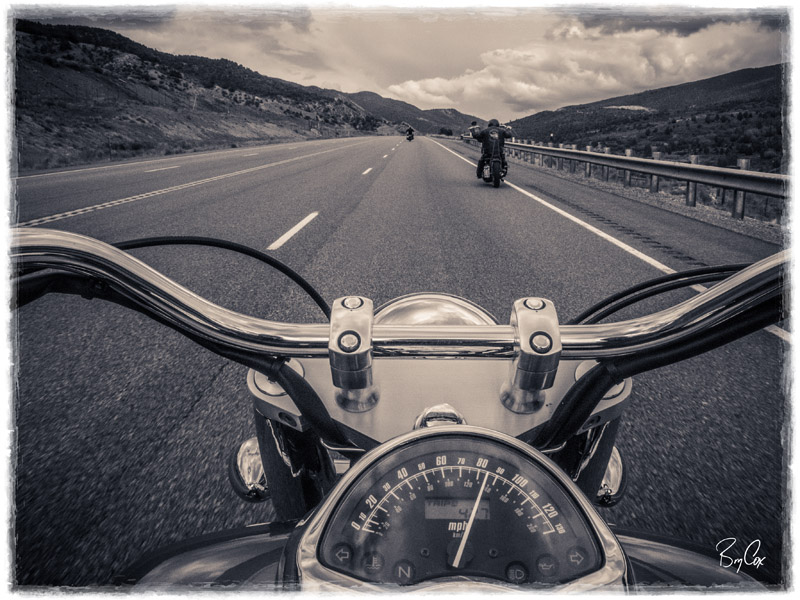 Here’s Shawna on my bike during a gas break. 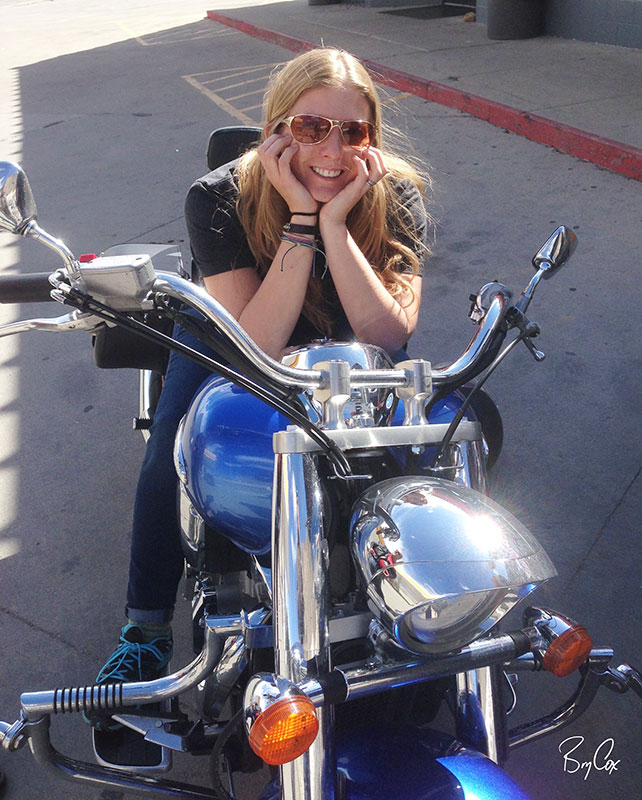 Part of the fun of being on a bike is that you are out in the environment, you feel everything, smell everything, and you see the entire sky, and not just the frame of a sky through a car window. And the sky that day with the storm clouds was unbelievable. 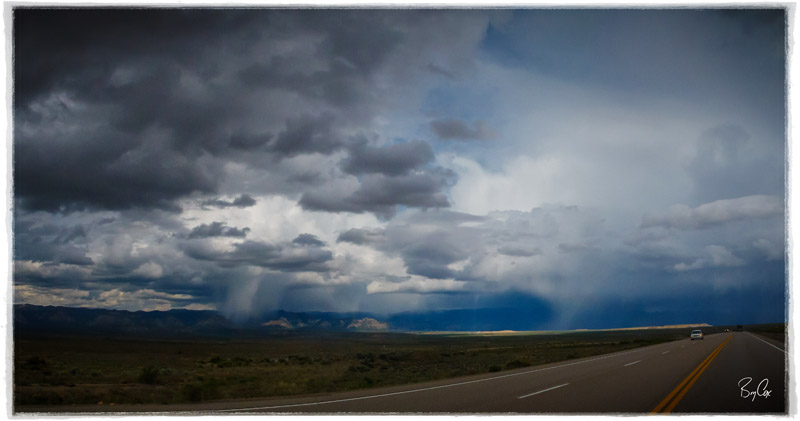 We were always seeing storms to the side and behind us, smelling the rain, feeling the wind, but never a huge downpour on us. Here’s an iPhone pic I took of our bikes with the support van as we watched a storm to our left and one in front as well blow by. 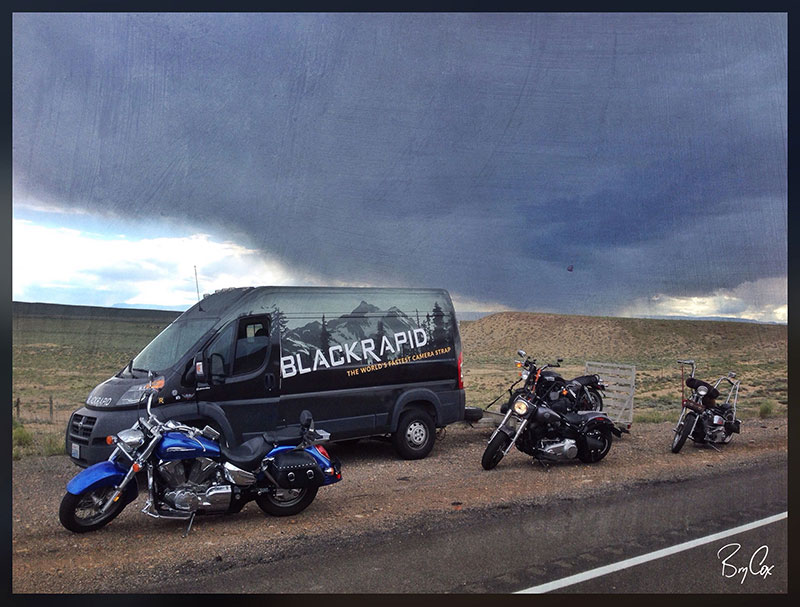 Here’s Mike with that storm in the distance, sporting a small BlackRapid strap for his point-and-shoot. 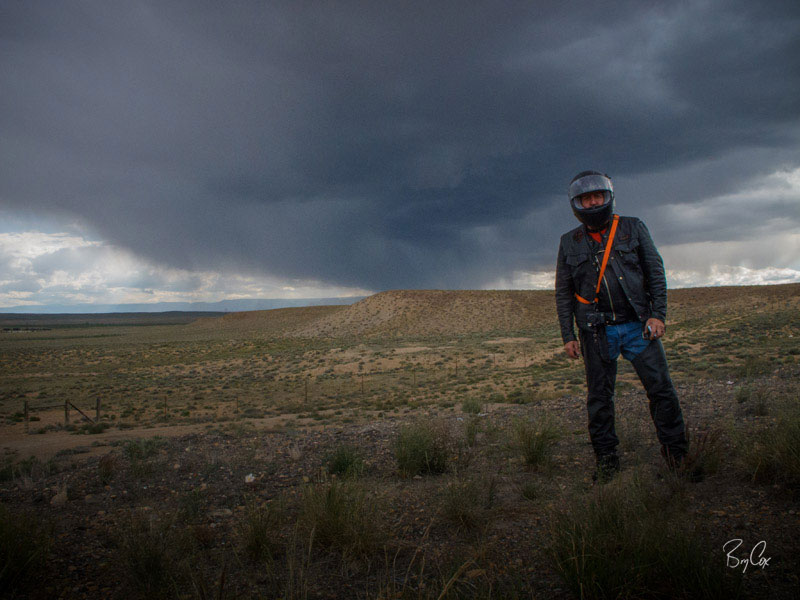 Below is an image of another great storm to our side, and the clouds and light were perfect. Mike pulled over to shoot it and I had to do the same. 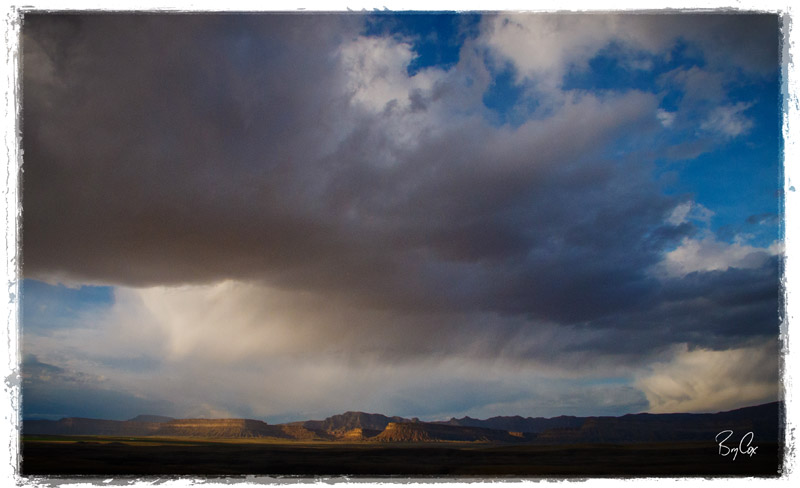 I took one of it too with my iPhone so I’d have something to post to social media accounts that day as we were riding. This is one of my favorite iPhone images from the day. 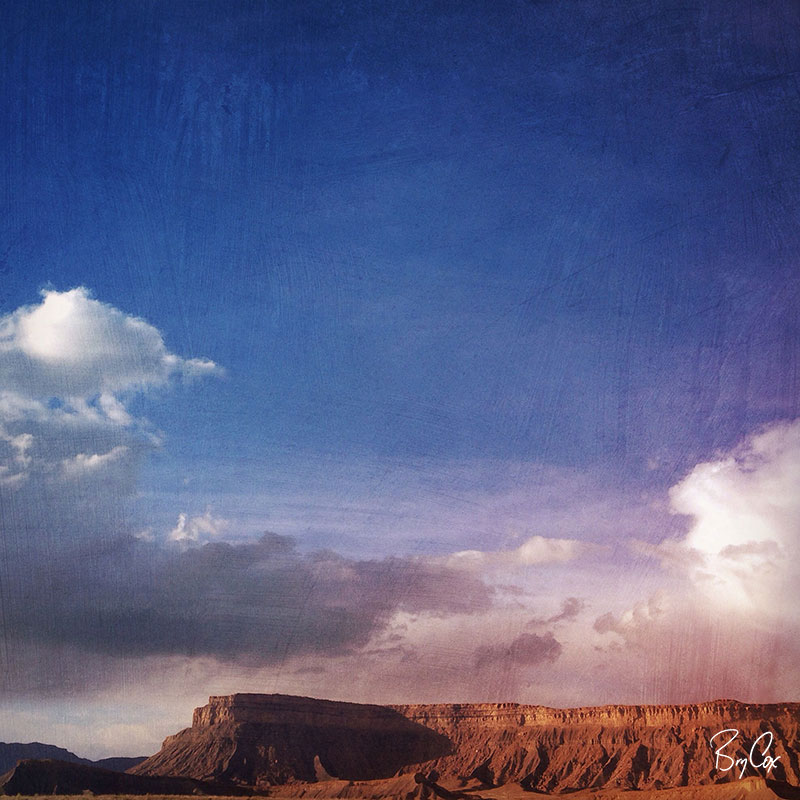 And this rainbow was to our left as we approached Moab.

After reaching Moab, we ate dinner and I as they settled in to camp, I got back on my bike and headed home so I’d be back for my appointments the next day.