I just got back from speaking in China at Photo Beijing, 2015 where I was treated like a king. It was such a great experience and I’ve been anxious to share more about this trip. My hosts also asked if I’d be a photographic ambassador and visit Inner Mongolia as well, and I took a lot of great images there of the most interesting faces. I’ll share more about that later. For part 1 of this trip I wanted to start with Photo Beijing 2015. 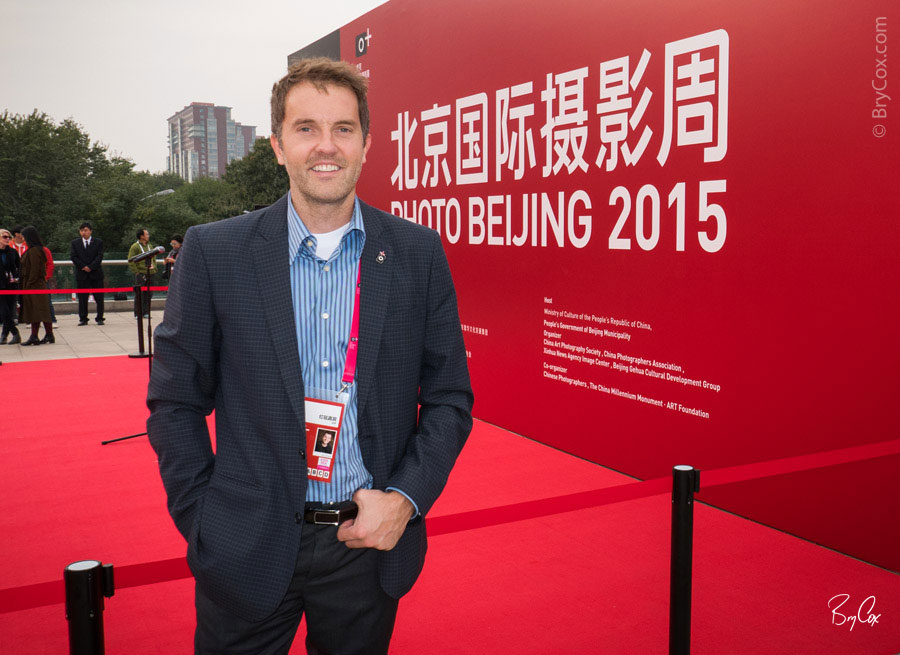 I wrote an article on street photographer Vivian Maier, which is getting compiled with other articles into a book being published later. Because of that article, I was asked to travel to China to speak on Vivian Maier. (I’ve also posted that article online for paying members of my photography training site for it’s insight into posing and reading people’s personalities.)

After speaking on the opening day, they had a big ceremony complete with red carpet where they had me walk while being photographed by a huge crowd of people. While walking amongst the camera clicks and flashes, they had television cameras too from CCTV, and I could even see myself projected on the huge screen in the distance as it cut from camera to camera. The whole thing was quite exhilarating. 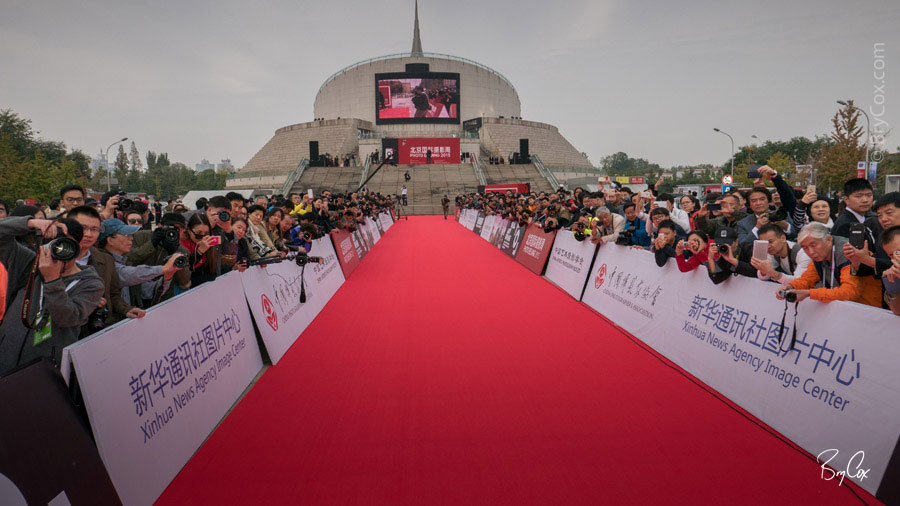 I was so excited that I made this iPhone video at the top of the carpet, still on a high from the walk.

They also had these models wearing dresses made of photographs, walk the carpet the opposite direction. 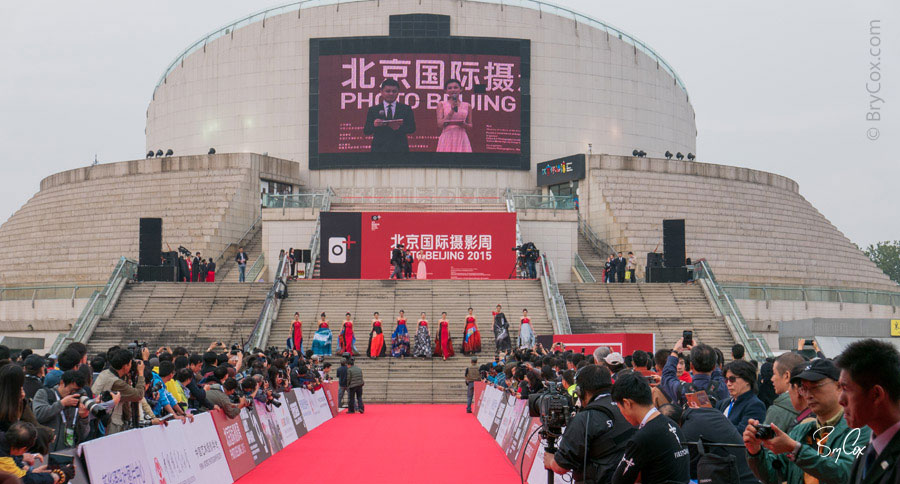 At the top of the carpet, there were welcomes and speeches from government and photographic dignitaries. 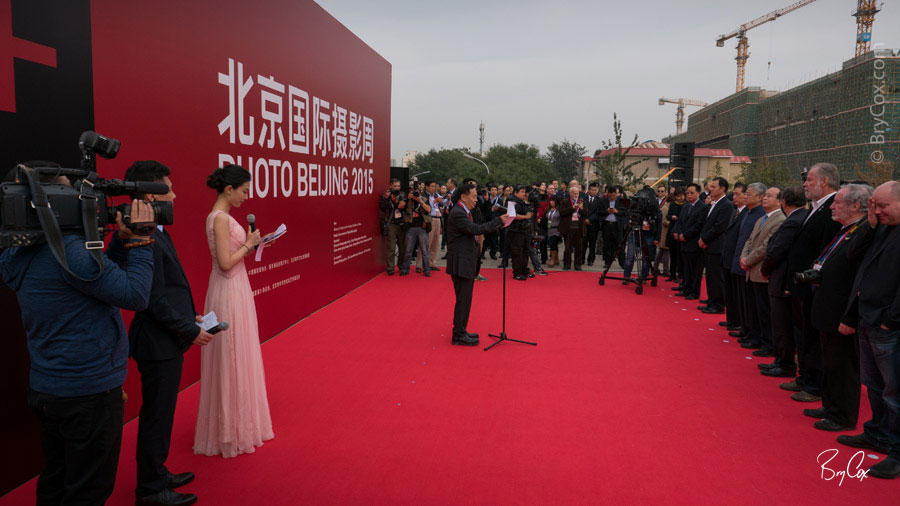 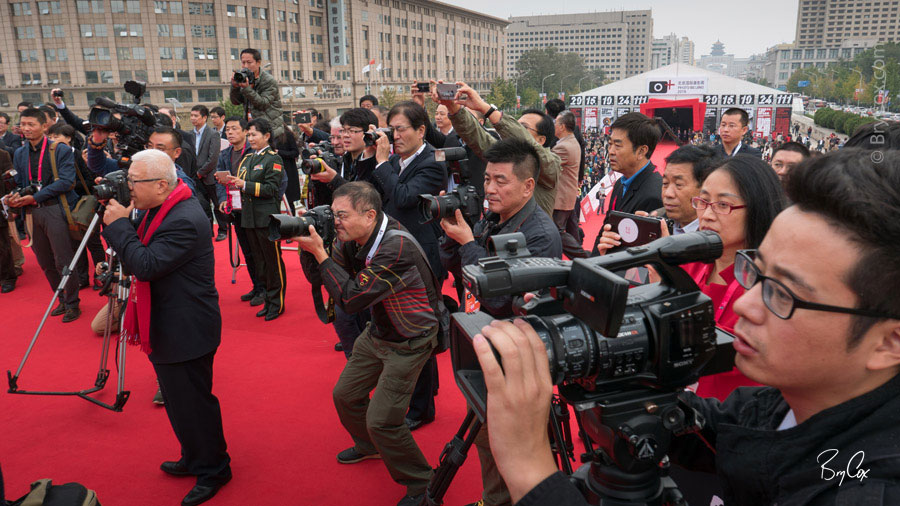 And I had to get a photo with me with my friend Bing, who invited me over to China, and who I got to know years ago when I first went to China to speak in 2009. Her father is one of the most well-known photographers in China and was in charge of the event. 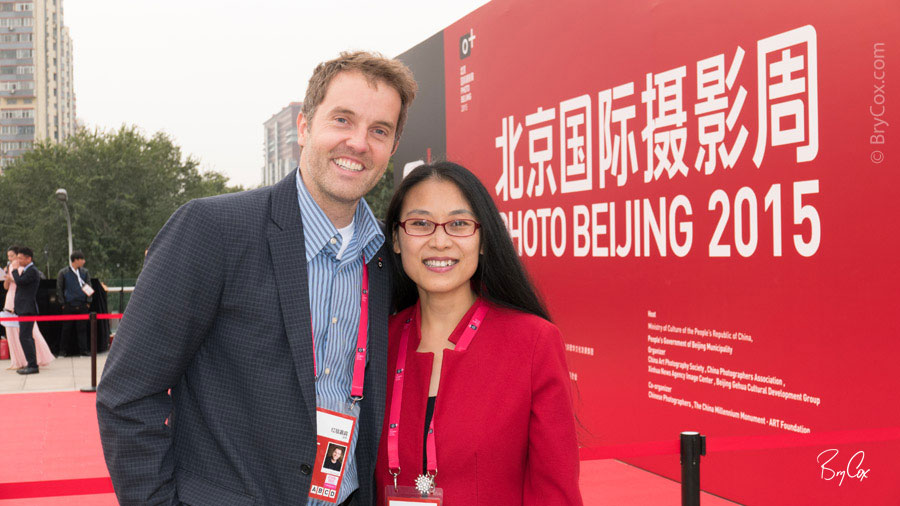 After the red carpet ceremony, we were taken to a television theater and asked to sit on the front row for another opening ceremony event, this time we were entertained by amazing local dancers and singers. Again, this was all filmed by cameras from CCTV, which continually cut to cameras on us. Sometimes, the cameras were awkwardly close to my face, so close I couldn’t see over them to see the dancers. 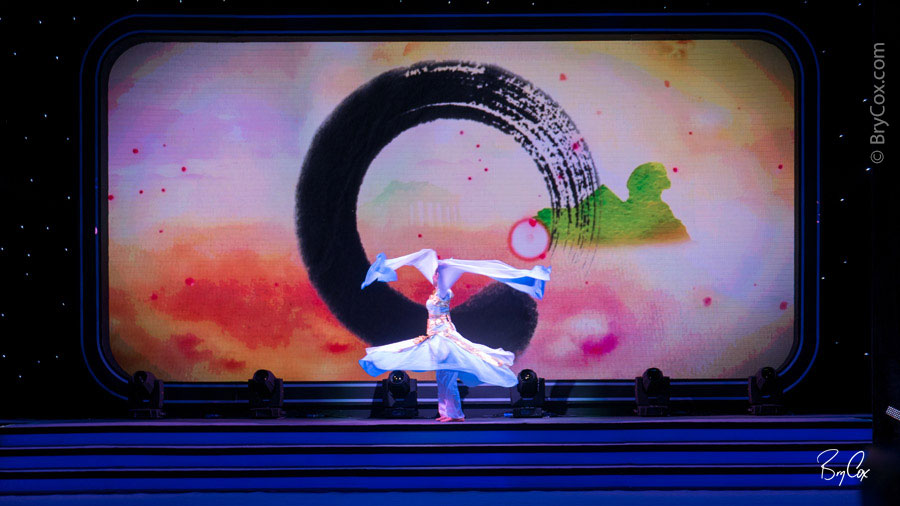 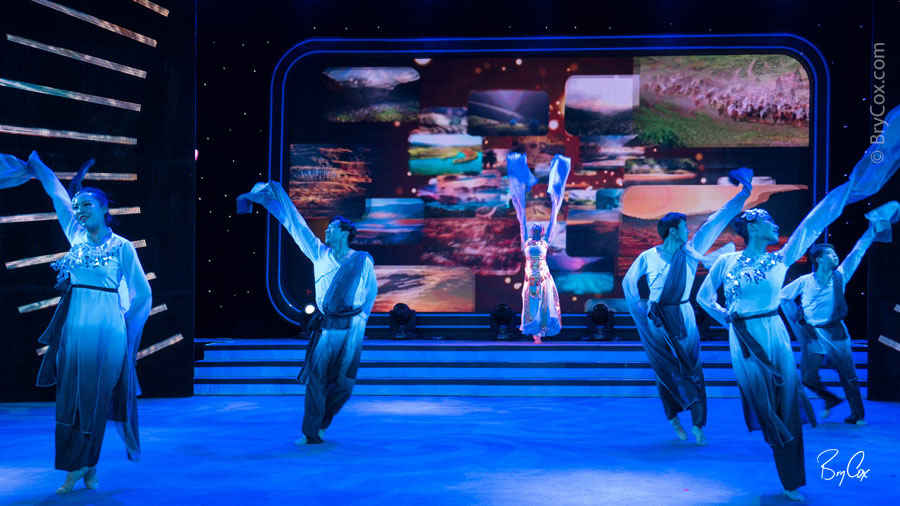 All of these images I’m posting were shot with my small Lumix point-and-shoot camera, which I love for it’s manual controls, retro look, and very small size. It was the best camera to take on a trip like this, giving me both control as well as a very small size and weight. 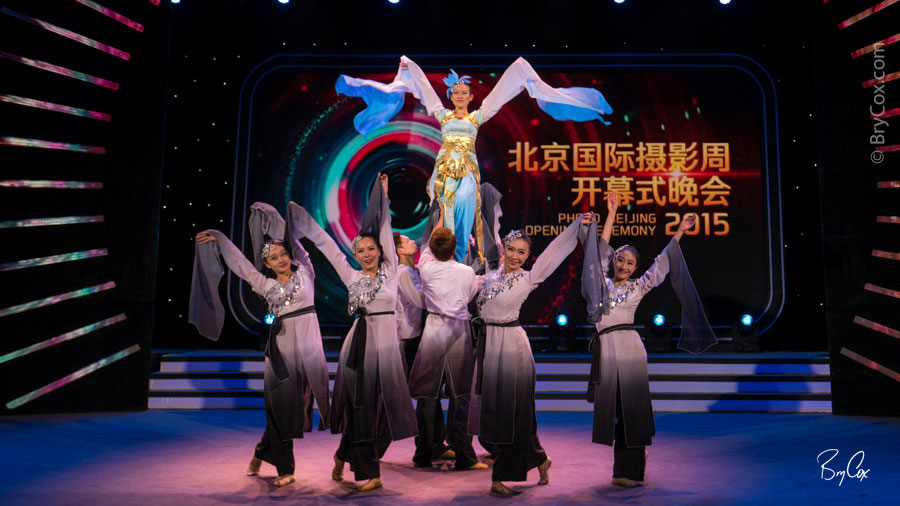 The next day, me and the other speakers were part of a roundtable discussion. I was the only one from the US, and other countries represented included Bangladesh, Malta, France, Germany, UK, Indonesia, and many others. We all wore headphones with receivers capable of receiving various channels of audio from the translators. It was incredibly interesting to see so many people with so many backgrounds and languages, all connected by photography. 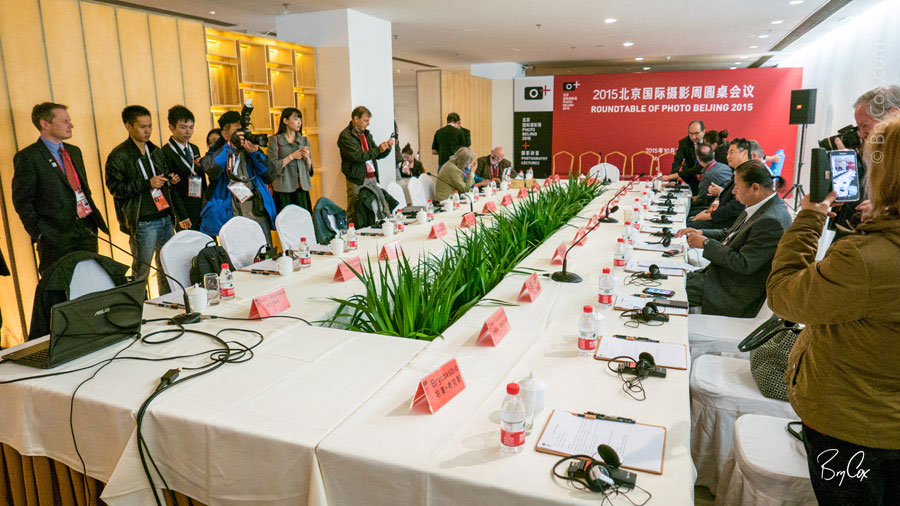 Somehow when my name was translated from English to Chinese and back into English, it came out as “Bry Cox’s Bio.” So a few times throughout the event I saw my name written this way. 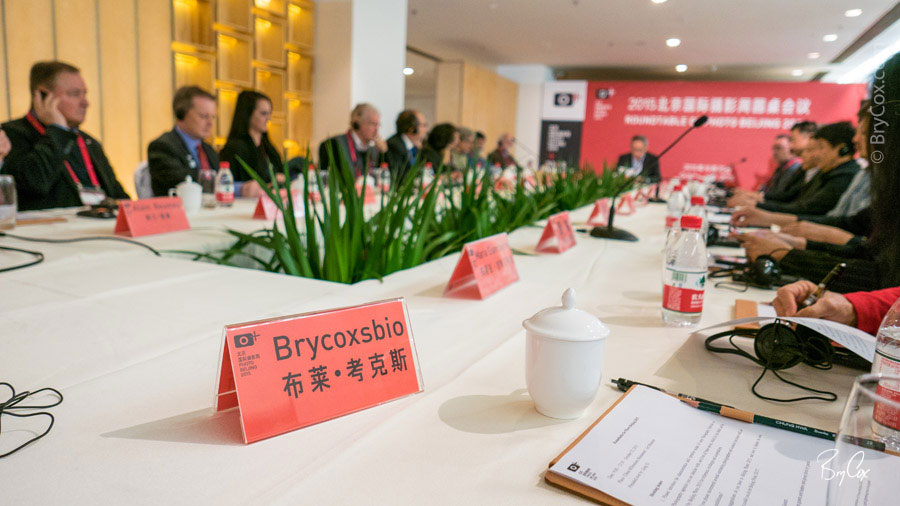 I was also given some translators at this event, local college student volunteers that followed me around everywhere and made my life easier. 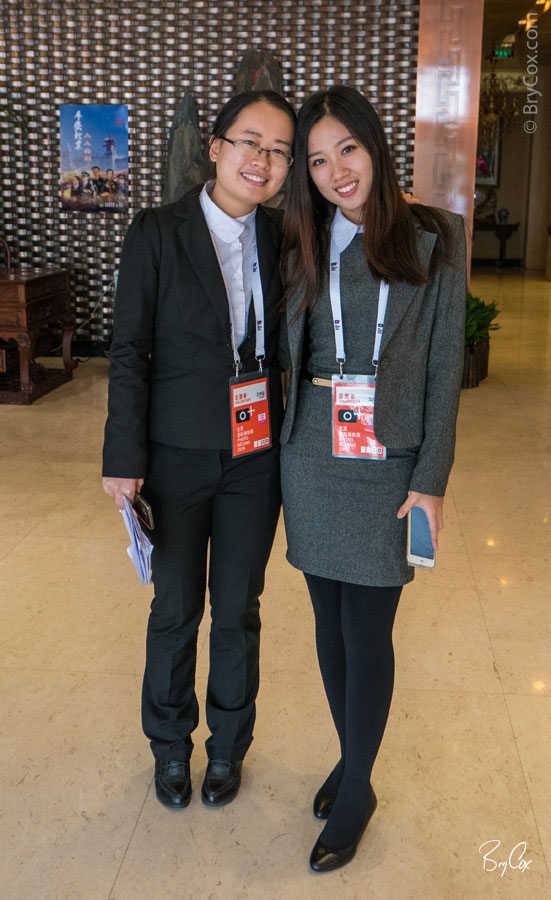 When they asked if I’d come speak on photographer Vivian Maier, I had no idea how big of an event it would be. They had beautiful signs like this printed around town inviting the public to an exhibition of original prints shipped from New York.

And here I am at the exhibition after I was done with my work and meetings, wearing more relaxed clothes. It was an incredible show. They had 50 original images on display, and they had made wall paper based on her negatives. It was all quite beautiful.

Before this, I had only seen Vivian’s images in books. It was quite an experience to see them up close and in person, looking at real silver halide prints. The detail that close was incredible and the images were even more beautiful and inspiring. 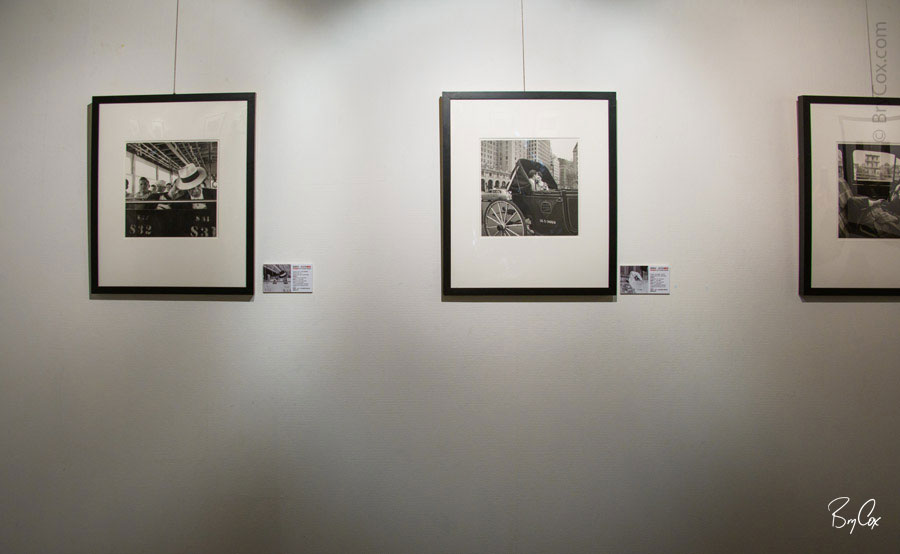 Of course in Beijing I went on some photo walks where I did some of my own street portraits that I’ll share in my next post, images like this cute little boy driving his motorized trike through the busy streets of Beijing. 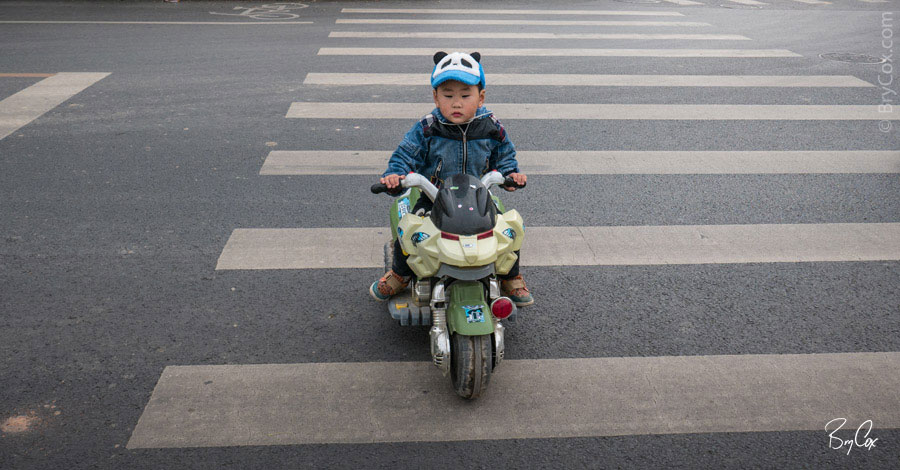 And later in Mongolia I was presented with custom made traditional clothing in a ceremony which I’ll get to in a later post. And while there, my hosts took me to photograph a Mongolian primary school where kids wrote in calligraphy with giant brushes, to a Buddhist temple at sunrise, and to a local farming village where the residents put on a parade for us. During all of this I created some photos that I’m really excited about, and I’ll share them in the next posts. 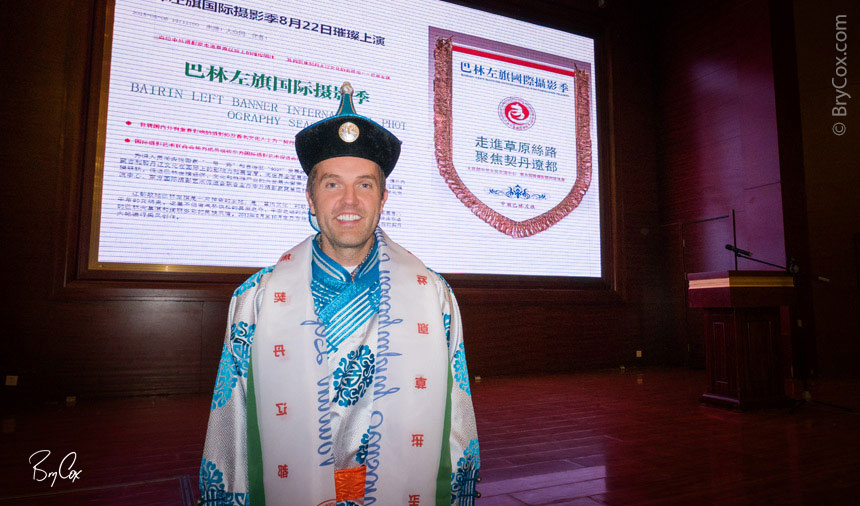 So until next time, America.